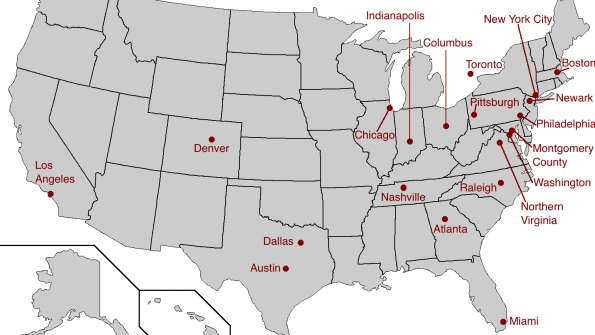 Amazon has whittled down the 238-plus proposals it received for its new headquarters to 20 potential locations, and mayors are already reacting to the news.

Amazon has whittled down the 238-plus proposals it received for its new headquarters to 20 potential locations, and mayors are already reacting to the news.

The company opened bidding for its second headquarters building to localities and states/provinces across North America in September of last year, according to Reuters.  The new headquarters would be equal in size to its current Seattle headquarters. In addition to the $5 billion Amazon would spend on the new headquarters, it announced that it would bring 50,000 jobs to the area it picked.

On Jan. 18, the e-commerce giant announced the 20 localities that made its shortlist, per the New York Times:

Several mayors of the finalist cities responded quickly to their locations’ inclusion in the list.

"As a thriving city with a talented and diverse workforce, culture of innovation and opportunity for all, I see no better city than Boston for Amazon to call their second home,” Boston Mayor Marty Walsh said Thursday in a statement, per New England Cable News.

I am so pleased that Atlanta was one of 20 cities selected for @Amazon’s HQ2 Shortlist. I look forward to continuing to work with @GovernorDeal, Commissioner Wilson & all of our stakeholders to make sure Atlanta puts forth the strongest, most competitive bid possible. #AmazonHQ2 https://t.co/aXtm9FWjHt

Thrilled to be in the next round of @amazon HQ2 process. There’s much work left to be done but I want to thank my fellow mayors, @DRChamber, @FTWChamber and all our citizens for making @CityOfDallas and DFW such a desirable place to be!

Like Mayor Rawlings of Dallas, Pittsburgh Mayor Bill Peduto acknowledged in a news conference the work that lies ahead for these cities. "Our work's ahead of us. We have to address not only the positives that our region has but also the challenges that our region has," TribLIVE reports.

Several cities had previously made their proposals publicly available, clarifying the advantages they had over other cities. Some cities like Columbus offered Amazon future incentives like income tax refunds, property tax abatements and a transportation plan, according to the Columbus Dispatch.

Other cities like Philadelphia made existing amenities like a bustling airport, proximity to other cities, strong cellular service and a thriving local pool of engineers the major part of their pitches, the Associated Press reports.

“Getting from 238 to 20 was very tough — all the proposals showed tremendous enthusiasm and creativity,” said Holly Sullivan, Amazon’s head of economic development, according to the Times. “Through this process we learned about many new communities across North America that we will consider as locations for future infrastructure investment and job creation.”

Amazon previously stated that it plans to decide on the home of its second headquarters sometime this year.