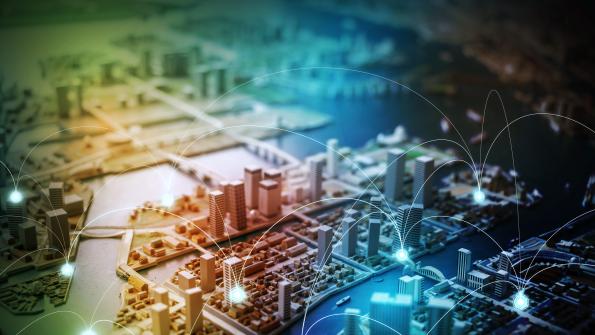 The new cloud over smart cities

According to a recent report from the National League of Cities (NLC), 66 percent of U.S. cities are investing in smart city technologies, and 25 percent of those without smart city systems are exploring how to embrace this new frontier.

But what makes a smart city? Or what is meant by an investment in smart city technologies? There is a tremendous diversity of answers to these questions, as there are approaches to building smart cities. The one underlying theme to every answer is that smart cities are connected cities. The new “urban cloud” might be connecting sensors and cameras. Or it might be connecting citizens and government. But above all else, it’s most certainly connected.

Today, there are numerous real-world examples of how connected cities are using data from social networks, mobile applications and IoT sensors to optimize energy efficiency, security, traffic, infrastructure, public safety, emergency response and more. But for the cities that are evaluating smart city tech for the first time, there’s often a feeling that the cart is ahead of the horse. How can a community successfully deploy smart city applications without the underlying network being in place?

Convinced that connectivity is the enabling capability, the city’s CIO is still left with at least two fundamental questions. First, how do we pay for it? Second, what smart city applications give us a real ROI?

A smart city network that pays for itself

Interestingly, one of the most often talked about connected city services is smart street lighting. With smart street lighting, cities can cut costs by remotely managing more efficient lighting schedules and of course by switching to more energy-efficient luminaires. But how do you put all these lights on the network in the first place?  That’s a logical question and the answer might surprise many. The lights are the network.

Today’s smart light solutions from firms like Silver Spring Networks, Philips or Sensus provide network control nodes as part of the advanced lighting unit placed on the pole. As cities deploy lights, they are actually deploying a city-wide network.  For many, this is the connected infrastructure that will serve as a springboard to unlimited smart city applications that can be tailored to meet the unique needs of cities, neighborhoods, agencies and citizens.

I can hear the CIOs from smaller and medium-sized cities now. That’s fine for New York and Chicago but what about my town. Can I really save enough money to invest in smart street lights that will pay for themselves AND give me my smart city application network? Consider the story of Richmond Hill, a suburb of Toronto.

“This is an upfront and forward thinking investment that will pay for itself in roughly six to seven years,” said Mayor Dave Barrow. “Switching to LED lights will help us conserve energy, save money and protect the environment.”

Of course, he’s right about the investment paying for itself. LED lights consume 50 to 60 per cent less energy, have a 20-year life expectancy and reduce maintenance costs by up to 80 per cent. Further they have superior light quality, improving safety for citizens, drivers and pedestrians. Estimates also show they will reduce greenhouse gas emissions from lighting by 575 tonnes per year –the equivalent of taking over 100 passenger cars off the road.

Above and beyond their energy, cost and environmental benefits, the smart street lights created a wireless communications network. With this network in place, Richmond Hill is one of the few North American municipalities that has laid the foundation for high-tech systems management and future ‘smart cities’ applications.

Smart city applications that build themselves

Once the smart street light network is in place, what about all the smart city applications now enabled by our new city cloud? Every city is clearly different, with unique politics, cultures, geographies, urban challenges and climates. Obviously, smart snow removal applications, powered by snowfall sensors, may provide real savings, improved traffic and transportation safety in Green Bay, but probably not in Dallas. Hurricane recovery applications, enabled by pole-tilt sensors, are clearly a wise-investment for Miami or Houston, but perhaps not so much in Cleveland.

The needs are different for every city. Yet at its most basic level, city agencies need accurate and timely data from the field so city hall can make better decisions and direct quick action. That agility depends on communications driven by data. While more and more smart city projects promote the networked capabilities of the ever-growing Internet of Things (IoT), the more fundamental challenge remains that the vast majority of city assets are still managed by workers with paper forms.

The transition to cloud-based mobile apps can seem daunting for municipal IT organizations. So, they often stick with traditional services, methods, devices and processes. After all, “if it ain’t broke…”. Thankfully, the latest mobile technology, called zero-code, is helping utilities see just how easy it can be to configure, not develop, mobile apps that can be customized for all types of applications from 311 services, public safety, utilities and all types of city workflows that connect citizens and agencies in ways never before possible.

Consider two very different examples.  The first case springs from the smart street lighting projects covered above, where Ameresco built a cloud-enabled, zero-code app that helped work crews install, commission and manage the street light devices in Richmond Hill.  The app helped them decrease unit installation times by over 50%, helping keep the project on track and on time.  In the second example, the Sacramento County Sheriff’s Department built a cloud-enabled, zero-code app for homeless outreach that provides data to 88 different agencies.  With data analytics that get at the causes of homelessness, this smart city application improves the near-term outcome for homeless individuals and families, while also helping shape smarter policies to prevent it.

From utilities to public safety, these smart city case studies provide a glimpse into vastly different stakeholders and workflows. The common threads are the city network and a zero-code app platform.

With smart city solutions for different agencies generating more and more data, from people and devices, Big Data analytics offer new insights that can improve the quality of city life. But cities have to start somewhere. Luckily, there is a connected city network that pays for itself and zero-code smart city applications to exploit it.

Mike Gundling is Vice President of Product Management and Marketing at TerraGo. Gundling has a proven track record for over 20 years in launching market-changing software products in enterprise, aviation, and mobility sectors.