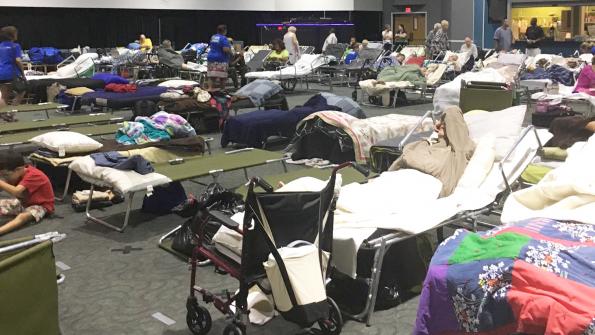 When hurricanes strike, some residents can’t evacuate. Local governments will also commonly see scores of non-residents flee into their areas, even if storms are threatening those areas too. It is for both groups of people that governments establish emergency hurricane shelters.

Coordinating and managing these shelters is no simple task, and each local government encounters unique issues in doing so. However, the experiences of Seminole County, Fla., Laredo, Texas and Norfolk, Va. during Hurricanes Irma, Harvey and Matthew (in 2016) respectively show that ample planning, teamwork, quick yet adaptive movement and giving transitioning aid are critical in coordinating and managing emergency shelters during hurricanes.

The preparation begins far before a storm hits, Seminole County Emergency Manager Alan Harris says. Seminole County held 17 shelter training classes this past year for emergency situations, including one training just a week before Hurricane Irma caused about $331 million in damages in the county.

The trainings differ in scope — one involved the county activating a shelter and having staff set it up. While the county hasn’t used American Red Cross (ARC) volunteers to help its shelter staff since before 2016, it uses the organization to educate its trainers for the classes.

“[Employees] go to those shelter training classes just like they go to a customer service class, a class for computer services, things like that… there are a lot of different services in an emergency setting that they wouldn’t normally do day-to-day,” Harris says.

Those services are reflected in the pre-designated, auxiliary roles Seminole County employees assume during emergencies. These roles typically vary across department — during hurricane events, library, community service and parks staff serve as shelter workers, the school board does food preparation in the shelters, law enforcement provides security and animal services staff take care of pets at pet-friendly shelters.

In designated special needs shelters for those needing enhanced medical care, the county houses medical supplies that come from pre-negotiated contracts with medical suppliers. Because the county’s health department has limited nurses on staff, it must rely on outside vendors to help as well. Having these professionals in place before a disaster strikes is crucial, Harris says.

“There’s not a lot of people that are available during a hurricane,” he explains. “So getting [nurses] pre-reviewed and making sure all of their certificates are up-to-speed… and then get them in here, that has to be done way prior to, as part of our planning processes.”

The county begins immediate hurricane preparations 16 hours before a storm is scheduled to hit — it takes eight hours to deploy resources and set up shelters, and it takes another eight hours to evacuate residents into those shelters. The latter is due to the county providing transportation assistance to those who need it. The county exclusively uses schools as shelters, so the county ideally closes its schools “when it’s beautiful outside,” and begins clearing out school desks then, Harris says.

Facing Irma, Seminole County opened seven shelters right away, with two on standby. The shelters began filling up quickly, so nine shelters were ultimately needed. While officials had begun deploying road crews just one day after the storm landed in the county, staff closed the last county shelter on Sept. 18, eight days after the storm hit the county.

But sometimes, governments don’t get the benefit of methodical execution during an imminent storm. Norfolk, Va. officials didn’t discover that Hurricane Matthew would bring about nine inches of rain to their area in 2016 until their streets were already flooding.

Prior to Matthew striking, Virginia hadn’t even been in the storm’s cone of uncertainty, and “we weren’t supposed to get hit,” Norfolk Director of Emergency Preparedness and Response Jim Redick recalls. But the city had received information about the then-Category 2 storm several days in advance, and because the storm was heading its way, Norfolk had its shelter teams on standby alert.

The original storm response plan had been to open three shelters in the city, says Norfolk Director of Human Services Stephen Hawks. The afternoon of the day the storm was scheduled to hit, a city conference call showed that there would be some non-threatening rainfall.

By the evening however, another conference call revealed the previous forecast was inaccurate, and by that time, “we were getting tremendous rainfall,” Hawks recalls. “We had a plan in place, but we had to start executing on the fly.”

Flooding prevented opening two shelters, so Hawks opened the remaining shelter within approximately two hours of the conference call. Communication with the city’s emergency operations center and ample pre-planning helped the city adapt to the evolving conditions and move quickly.

“Jim [Redick] does a wonderful job preparing us in advance, and we drill pretty constantly… that really does help us position to deal with changing conditions, to have a basic framework where we know what we’re going to do, but then adapt to the changing conditions,” Hawks explains.

Once the shelter was open, some of the staff who had planned to run the shelter couldn’t safely arrive there. But staff members from several departments were able to get to the shelter and provide various services like recreation and health. The city’s schools provided bus support for stranded people who would call the city’s emergency operations center (EOC) asking for help in getting to shelters. Meanwhile, police would come to the shelter to assist and ride along with bus drivers to aid in picking up stranded people.

By the next morning, more city workers had come by the shelter to replace workers. The city ultimately closed the shelter that next day as people stopped trickling in. All in all, Hawks calls it a “fairly large community effort.”

“We see it as kind of an extension of our normal duties because our citizens are going to be looking to us to provide the care for them,” he says.

That care can extend to cities and counties like Laredo, Texas that hurricanes may not physically affect. Laredo saw minimal rain during Hurricane Harvey’s late August sweep through Texas, and Harvey didn’t hit in an area in which the state would activate Laredo as a shelter hub, Laredo Fire Chief Steve Landin recalls. Nevertheless, city officials opened multiple shelters in the city and surrounding areas due to an influx of evacuees from Corpus Christi — which lies about 147 miles east of Laredo.

“We’re here to serve the public… that’s a primary function, taking care of the public and their needs,” Landin says. “So we had an opportunity to make their lives better as best as could be under the stressful situation that they were under.”

The city also had to move quickly to accommodate for the hordes of evacuees that came into Laredo. The city opened its first two hurricane shelters on Friday Aug. 25, with one designated as a special needs shelter. Five days later, the city had a total of four shelters that it closed, Landin says.

Once the storm subsided, Laredo officials began providing case management services for stranded families, getting them computer and tablet access and connecting them with transitionary services like those that the Federal Emergency Management Agency (FEMA) offered, Lerado Community Development Director Arturo Garcia says.

Altogether, it too, proved to be a team effort across the city. “I was very proud of the city employees and the way we worked as a team as a city and as a community,” Garcia says. “I even get chills talking about it.”

No emergency response can ever be completely perfect. Seminole County found after Irma that it needed to improve its radio technology and equipment, while the lack of showers in Laredo’s shelter facilities during the events of Harvey proved to be an issue at the time. However, each government noted that those who used their shelters expressed gratitude towards them.

Additionally, Landin explains, people want to get back to their lives after a hurricane strikes, so sheltering is ultimately a short, temporary fix to the issue.

“Personally, I think [sheltering] is a very important service that the public needs,” he adds. “We’re happy to be part of their temporary solution.”