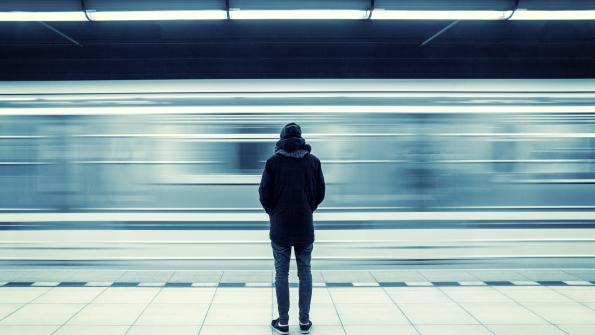 Young peoples’ shifting attitudes regarding transportation will change the way our cities operate.

Since automobiles were invented over a century ago, they have shaped the way we think about and order our lives. And with the advent of the interstate highway system after World War II, and the subsequent explosion of suburbs, cars have become the linchpin of American modernity. However, this a priori assumption that to thrive in America you have to drive is being questioned like never before.

For myriad reasons, Millennials – the 83 million people born between 1982 and 2003 – are rejecting cars in favor of alternative modes of transportation. As these young people are the next generation of innovators and up-and-comers in the workforce, it’s no surprise that communities offering viable and multiple alternative transportation options are growing. If our cities want to experience similar growth trends, they are going to have to fundamentally rethink their transportation structures.

How did we get here?

There are numerous reasons for the shifts we’re seeing today, Darnell Grisby, director of policy and research at the American Public Transportation Association (APTA), says. “[ Millennials] definitely want to live in communities that are walkable and have transit nearby,” he says. “[According to APTA data] it’s about 10 points higher than you’ll find with baby boomers – 41 percent to 33 percent.”

The reason for this sudden uptick, Grisby explains, is that Millennials increasingly see themselves as multimodal. “They are pragmatic consumers of mobility,” he says. “They consider the best trip option… and consider these options for every time they decide to go somewhere, whereas earlier generations had a predilection for getting in the car for every trip they took.”

Al McWilliams, a millennial that sits on the Ann Arbor, Mich., Downtown Development Authority Board, agrees that transportation options are important, and by addressing transit responsibly and realistically, a great many social ills could be assuaged.

“Transportation is affected and affects everything from equity to housing problems to infrastructure costs to safety,” he says, pointing out that tens of thousands of Americans die traffic accidents every year – a figure he finds unacceptable. “If you tried to invent the car today, you’d be put in jail,” he jokes.

One of the biggest considerations is for Millennials is cost, Nick Helmholdt, the acting director of Comprehensive Planning at the Chatham County – Savannah Metropolitan Planning Commission, says. Simply put, cars cost a lot of money, and there is a growing desire among Millennials to live frugal, debt free lives – imposed by internal or external factors. When other transportation options are available and cheaper, cars are increasingly seen as a luxury item rather than a necessity.

Technology is also a considerable factor – not only does technology allow for the optimization of time while on public transportation (checking work email, reading the news, socializing online, etc.), but telecommunications and e-commerce have diminished the need for people to actually go to physical places, and city planners seem to be ignoring how disruptive these technologies will be, Helmholdt says.

“Technology is changing the prioritization of the locations people need to be,” he explains. “If you can access [any number of] services from your phone, you won’t need to go to the post office to drop off the mail, you don’t need to go to these places that might be inconvenient. It’s definitely changing travel behaviors.” Even the traditional work commute is being upended by a technologically facilitated ability to work from anywhere. Fewer Millennials are driving to traditional offices, as a result.

Environmental considerations also play a key role in our shifting transportation patterns. “We know that Millennials care about the environment,” says Grisby. “About half of them in our survey (Millennials & Mobility: Understanding the Millennial Mindset) said that one of the reasons they take public transit is because it’s good for the environment. That is, in fact, a core value that they have.”

Where are we going?

These changes in desires and values are generating a dialogue about whether automotive dependency should be a foregone conclusion in our nation’s cities, but in order to offer what Millennials are demanding, our cities will need to change in both structure and ideology.

As with anything in local government, funding is the first – and often seemingly insurmountable – hurdle in providing the transit options Millennials are looking for. Fitting subway tunnels with the infrastructure to provide WiFi on trains, for example, is an extremely expensive, time-consuming task, Grisby says. “We want to be responsive,” he says, “but we’re facing headwinds when it comes to funding.”

However, the responsibility doesn’t fall squarely on the government’s shoulders. Rideshare programs and even app-based companies like Uber and Lyft can work into the mobility fabric of an urban environment. “We find that ridesharing does, in fact, expand the catchment area of public transportation service,” Grisby says. “People are using ridesharing to get to a train stop or bus rapid transit station, which helps our transit systems serve more people.” Grisby adds some transit systems are actually partnering with rideshare apps to increase their reach.

Ultimately though, it comes down to priority. “If you look at the evolution of our cities, there was a period where there was a disinvestment,” Grisby says. “Now the cities are coming back and the question now is how do you update those transit systems to reflect that growth.”

It starts by convincing public leaders that diverse transportation modalities are important to the success of our cities – a fact on which most experts agree. “It’s getting over the mental road block that cars are the only way to get around,” Helmholdt says.

This fight played out in downtown Ann Arbor recently, McWilliams says, in the form of a proposed parking structure. He and others argued that the structure was unnecessary and would only exacerbate downtown traffic. “We’re dealing with a limited geographical area… and if we’re going to be sustainable we need to get more people into that geographic area every day. We simply cannot do so one at a time, each in their own car.”

McWilliams said the now-scrapped plan for the parking structure was that it would pay for itself over 20 years, but he questions if that parking would even be necessary 10 years from now. “If we play the game right,” he says, “It won’t be.”

The good news, Helmholdt says, is that nothing new needs to be invented. “We have all of the tools and strategies needed to solve these issues readily available,” he says. “We know the answers already, the question is how do you implement them, how do you do them in a manner that is logical and sequential and fiscally stable.”

Editors note: An earlier version of this story incorrecty asserted the number of traffic deaths anually in the U.S. The figure has been changed.