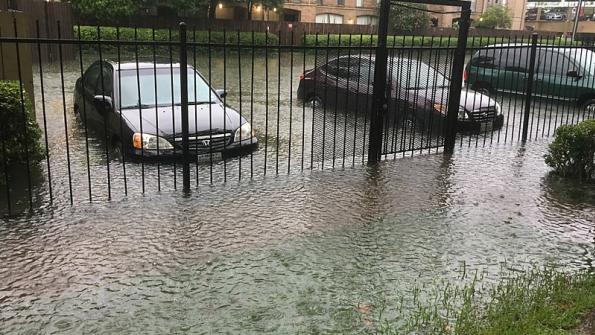 Houston’s infrastructure and government have come under fire for not adequately handling the fallout that Hurricane Harvey brought to the city.

Houston’s infrastructure and government have come under fire for not adequately handling the fallout that Hurricane Harvey brought to the city.

Harvey, which has since been classified as a tropical storm, has dumped at least 19 trillion gallons of water on Texas since the storm began, Mashable reports. About 1.2 trillion of those gallons fell on Harris County alone, where Houston is located.

The flooding quickly overwhelmed the city’s mitigation systems. On Aug. 29, one of Houston’s two flood-control reservoirs, the Addicks Reservoir began overflowing for the first time in history, the Washington Post reports. The U.S. Army Corps of Engineers predicts that Barker Reservoir could begin overflowing on Aug. 30.

Despite being the country’s fourth most-populous city and located near the Gulf Coast, Houston’s flood mitigation system is designed to clear just 12 to 13 inches of rain per 24 hours, the Associated Press reports. Moreover, the current flood marks the third “100-year-or-more” category of flood to sweep Houston in three years.

“Houston is the most flood-prone city in the United States,” Phil Bedient, a Rice University environmental engineering professor, told the AP. “No one is even a close second — not even New Orleans, because at least they have pumps there.”

The city government has also been criticized for its response to the hurricane. While seven Texas cities and eight Texas counties announced mandatory evacuations, Houston issued no evacuation, according to CNN.

In contrast, Texas Governor Greg Abbott seemed to recommend an evacuation on Aug. 25, hours before Harvey made landfall, according to CNN. “If you wait until you realize how serious this condition is, you likely will find that it’s too late for you to be able to evacuate,” Abbott said at a press conference. He later told CBS that evacuation calls are up to local officials.

Houston Mayor Sylvester Turner has defended the absence of an evacuation order, citing Houston’s sheer size. “You literally cannot put 6.5 million people on the road,” Turner said in a press conference, per CNN. “If you think the situation right now is bad, you give an order to evacuate, you are creating a nightmare.”

As American City & County reported, agencies across the country have sent first responders to aid local authorities in rescues. While the federal government has already sent aid to Houston and other areas of Texas, recovery from the hurricane is expected to take years.

“We expect a many-year recovery in Texas and the federal government is in this for the long haul,” said Elaine Duke, acting Homeland Security Secretary, per Fox News. “We will help the people of Texas for as long as they need.