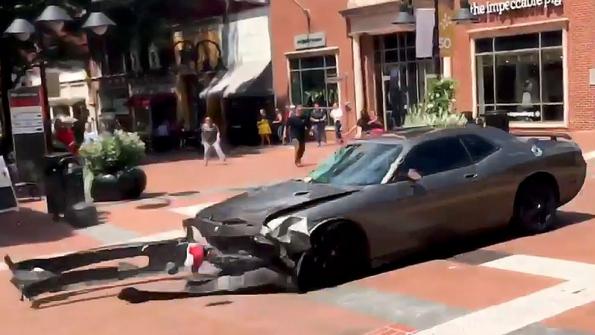 Mayors across the country are responding to the violence in Charlottesville, Va. this past weekend, as well as President Donald Trump’s initial response to it.

Mayors across the country are responding to the violence in Charlottesville, Va. this past weekend, as well as President Donald Trump’s initial response to it.

On Saturday, Aug. 12, a Charlottesville rally gathered white nationalists and right-wing groups to protest the removal of a Confederate general statue in the city, the New York Times reports. Counter protesters met the white nationalists, and skirmishes broke out. Police then began to disperse the crowd, calling it an unlawful assembly, CNN reports.

About two hours later, a Dodge Challenger slammed into a crowd of walking counter protesters, according to CNN. The suspected driver was later arrested. One person was killed, while 19 were injured. Later, two Virginia State Patrol troopers died when a helicopter they were aboard while monitoring the events crashed.

President Trump denounced “this egregious display of hatred, bigotry and violence, on many sides,” neither mentioning white nationalism nor the woman who died in the carnage, Politico reports. While he later denounced racism and specific racist groups in a statement on Monday, his tepid response over the weekend elicited critiques from several public officials.

“We have a lot of grieving, a lot of work to do as a city and as a country, but he should look in the mirror,” Charlottesville Mayor Michael Signer told CBS News in response to Trump’s statement.

Signer also defended law enforcement’s response to the protests. “We had a very strong security plan in place with a lot of folks, to allow people to express their views,” he told CBS. “Unfortunately they didn't want to do it peaceably so that's what happened.”

Los Angeles Mayor Eric Garcetti condemned the violence, saying, “The shocking violence in Charlottesville — and the abhorrent ideology behind it — have no place in America or anywhere in the world,” according to Los Angeles TV station KTLA. Meanwhile, Madison, Wisc., Mayor Paul Soglin slammed the violence and the president’s response, according to the Wisconsin State Journal.

“We urge every leader at every level of government to be firm that in the year 2017 there is no place in America for the display of violence we see in Charlottesville,” Sogin said in a statement, per the State Journal. “It is critical that violent hate groups such as the KKK, Nazis and white supremacists be identified and repudiated by all responsible elected officials starting with the president of the United States.

The violence has also ignited public action. Lexington, Ky., had planned to take steps towards removing statues of two Confederate figures from the city’s former courthouse, the Times reports. However, Lexington Mayor Jim Gray said the violence has spurred him to speed up those plans.

The former courthouse is to be reopened as a visitors center after being renovated, the Lexington Herald-Leader reports. The statues would be moved to Veterans Park, which Lexington Vice Mayor Steve Kay says would “allow the city to still honor history.”

Roanoke, Va., Mayor Sherman Lea held a peace vigil the next day to denounce the violence and white nationalist rhetoric and grieve, Roanoke TV station WDBJ reports.  “I wanted our citizens to know as long as I'm mayor, we're gonna continue to work together and live together and resolve our differences together,” Lea said, per WDBJ.

However, some public employees have made disparaging remarks about the violence.

A Shively, Ky. police officer, Morris Rinehardt, was placed on administrative leave after he posted a meme of the damaged car that slammed into pedestrians, according to the Washington Post. The meme reads, “When you were born a Challenger, but identify as a Ram.”

Conrad Lariviere, a Springfield, Mass., police officer, was reassigned after commenting “Hahahaha love this, maybe people shouldn't block roads” on a story about the car crashing into counter protesters, according to the Post.

Springfield Mayor Domenic Sarno slammed the comment. “Unbelievable! There is no place for this in our society, let alone from a Springfield Police Officer,” he said, per the Associated Press. “This is not an overall reflection of our men and women in blue, who serve with honor, courage and compassion.”