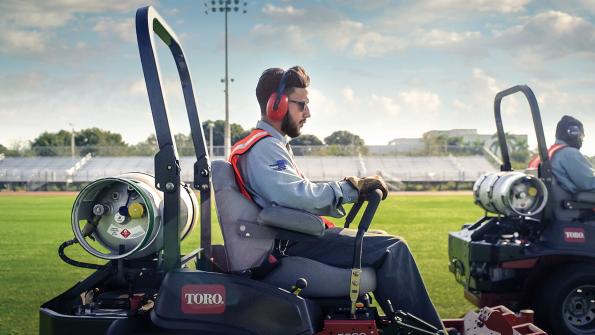 The Miami-Dade County Parks, Recreation and Open Spaces Department is maintaining more of its green space with less fuel and maintenance since switching from gasoline to propane mowers.

One of the most populous counties in the U.S. is maintaining more of its green space with less fuel and maintenance since switching from gasoline to propane mowers.

The Miami-Dade County Parks, Recreation and Open Spaces Department began using commercial propane mowers in 2008. The decision was made after the department conducted a study comparing the fuel economy and overall productivity between propane mowers and their gasoline equivalent.

It found that commercial propane mowers were better equipped to meet the never-ending demands of southeast Florida’s year-round cutting season — all at a lower cost per hour of operation.

“People don’t realize the grass doesn’t stop growing here in Miami. Then, in the rainy season, we get a lot of precipitation, so you have to cut, cut and cut,” says Gil Delgado, sports turf and landscape division chief for the department. “And this is why we use propane mowers, because to us they are very efficient and very productive.”

Now, more than 95 percent of the department’s fleet consists of commercial propane mowers. Delgado says the department will continue to replace its gasoline equipment with propane because the fuel saves so much time during the day. With propane, crews finish mowing faster because they can carry an extra propane cylinder to a site rather than leaving to fill up gasoline tanks at a filling station during the day. One propane cylinder can power a day and a half of mowing, and refueling is as simple as swapping out an empty cylinder for a full cylinder.

Along with increasing crew productivity in the field, Delgado says fuel savings are another reason the county has continued using propane mowers for nearly a decade. Propane costs less than gasoline, and a competitive bidding process between several area propane retailers helps ensure the department’s fuel costs remain low. Plus, the propane retailer schedules delivery of the propane to several county facilities across Miami, too, making the process hassle-free.

Maintenance costs are also reduced for the county’s propane mower fleet. In-house mechanics were trained to work on the propane mowers by the mower OEM, and the department quickly experienced maintenance advantages that helped reduce costs and increase uptime. In the field, operators noticed it was rare for the machines to break down.

“From the first oil change, it was a no-brainer,” Delgado says.