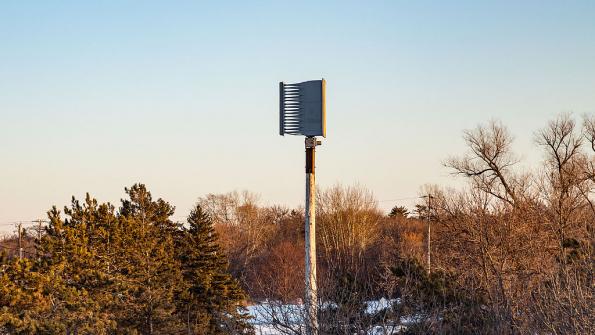 A hacker created a cacophonous symphony using all 156 of Dallas’ weather sirens as his instruments. The tumult lasted over an hour and a half Friday night and went on until early Saturday morning.

A hacker created a cacophonous symphony using all 156 of Dallas’ weather sirens as his instruments. The tumult lasted over an hour and a half Friday night and went on until early Saturday morning.

The sirens initially sounded during clear skies on Friday night at 18 minutes before midnight, the Houston Chronicle reports. Throughout the alarms, Dallas’ 911 system was flooded with calls from worried residents, which led to those with real emergencies waiting on the line for long periods.

"We had people asking if we were being attacked because of what's going on overseas," a city spokeswoman told the Chronicle.   The issue was ultimately fixed around 1:20 a.m. Saturday morning when city officials manually unplugging systems, essentially turning the them off completely, the Chronicle reports.

The siren system’s purpose is to alert anyone caught outside during a tornado or a dangerous storm, the Chronicle reports. The system uses a signal that is transmitted to the sirens to set them off, according to Dallas TV station WFAA. The transmitted signal’s lack of encryption made the hack possible.

But when the system was bought about 10 years ago, encryption was not part of the vendor’s offer because officials didn’t know a hack like this was possible, according to the Dallas Morning News.

Within two days of the incident, the system was encrypted and other security measures were taken, the Morning News reports. "The issue was with how we transmitted our information and we’ve worked to close those gaps,” Dallas City Manager T.C. Broadnax told WFAA.

The Dallas Police Department has enlisted the Federal Communications Commission and the Federal Bureau of Investigation to help them track down the hacker, according to the Chronicle.