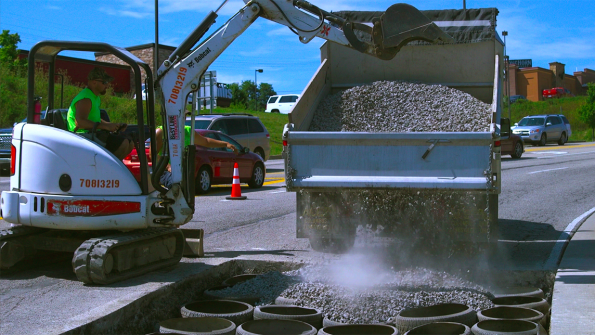 Use Pothole Terminator to repair persistent potholes. The system completely removes the water-damaged section of road base (the real cause of pothole formation) and replaces it with Mechanical Concrete, a geosynthetic technology that confines any crushed stone or aggregate material inside of a thin-walled cylinder made from waste auto tires. This cylindrical confinement improves the load-supporting capacity of the stone.

The system aids in creating a virtually indestructible road base that helps resist the water-generated, pothole failure mechanism. The system can permanently fix the average 3-foot pothole for less than $150, according to the company.

“Coming out of a rough winter, with all the freeze-thaw cycles like we’ve had this past winter, potholes are especially problematic,” says Jim Matuga, CEO of Pothole Terminator. “My advice to local governments is that they need to get to the root of the pothole problem, which is the road base. Potholes occur because of the erosion of the road base, and our product fixes that with a patented technology.”

Matuga tells GPN that highway departments can’t solve the pothole problem by putting more cold patch or asphalt in the hole. He says his system offers a green solution to governments. “We are finding a use for these waste auto tires; we are putting them in the road bed itself. We fill the tires with compacted stone and then pave right over the top of them, and this eliminates the pothole problem, which is due to the deteriorated road base.”

The pavement repair system physically confines and holds the base stone together. The process consistently creates a virtually indestructible, water permeable base course without depending on adhesives, binders or friction. The repair process is fast, can be completed with small equipment and instantly supports loads and resists erosion.

The system costs less than conventional pothole repair construction because it addresses the root problem and doesn’t need to be redone again in a few months, according to the company. It is estimated that Pothole Terminator will reduce the maintenance costs of pothole-riddled roads by 50 percent or more.

In the video, learn more about the Pothole Terminator pothole repair process.