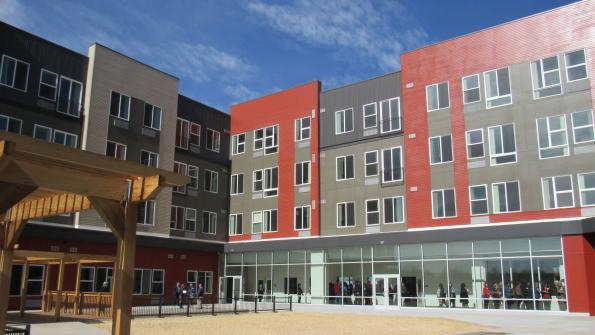 Social impact bonds use P3s and success benchmarks to power outside investment in public projects.

Several local and state governments are pioneering a new investment model to finance projects in their areas that uses success as a payment benchmark.

Social impact bonds (SIBs) — also known as pay-for-success models — involve public-private partnerships (P3s) in which private entities invest in public projects that are overseen by governments, organized by nonprofit intermediaries, executed by service providers and are ultimately evaluated by independent entities. Such projects generally tackle social issues like homelessness or family welfare, and they aim to reduce government dollars spent on existing measures.

Unlike a municipal bond, an SIB has no fixed rate of return for investors. An SIB’s ROI yield depends entirely on the project’s success, based on outcomes defined in the SIB contract. At pre-defined points in the project’s execution, a study of the program’s effectiveness will be carried out, and the government will accordingly pay funders pre-defined amounts based on how certain benchmarks are met.

“It’s a 100 percent performance-based contract for a specific kind of outcome,” says Tyler Jaeckel, a government innovation fellow with the Denver Department of Finance. “The funders that are lending money will possibly see returns or break even on their loan based upon the outcomes of the program.”

Jaeckel is also an assistant director for the Harvard Kennedy School’s Government Performance Lab, which assisted Denver in setting up an SIB-funded program that launched in February 2016. The Denver Social Impact Bond program provides up to five years of supportive housing and Assertive Community Treatment for 250 homeless repeat offenders who cost taxpayers over $7 million per year in legal and health care-related expenses, city documents show.

The partnership to carry out the program consists of eight public, nonprofit and private entities. Additionally, organizations like the Government Performance Lab provide auxiliary program support.

The $8.63 million SIB investment that’s financing the project comes from four foundations, three funds and one financial company, the documents show. Per the contract, these investors’ potential returns will be paid based on results of two outcome measures related to the program’s success—days of housing stability and jail-bed-day reduction percentages.

The former dictates if a participant stays housed for one year, the city will pay $15.12 per each of those days and per each future day spent in housing (for up to five years) minus days spent in jail, the documents show.

“Usually, the investors are looking close to about an 80 percent housing stability rate for them to receive their investment back, as well as close to about a 4.5 percent return,” Jaeckel says.

The latter outcome pays investors according to percentage points of reduction in days participants spend in jail versus nonparticipants over a three-year period, as measured in an evaluation. Per the three tiers of payment, participants must have at least a 20 percent reduction in jail bed days for investors to receive any funds back, while Jaeckel says the investment break-even point corresponds to about a 35 percent reduction. The expected rate of return at that point is 2 to 3 percent, he says.

Being just 11 months into the project, that evaluation is a long way away.

“It’s a very long process, but there’s a lot of great benefits to doing it,” Jaeckel says. “It works best where you’re really trying to shift resources towards proven, preventative programs that have a tangible benefit to both taxpayers and the community.”

State governments in New York and Massachusetts have also used SIBs to fund projects. In 2013, the Connecticut Department of Children and Families (DCF) sought and obtained technical assistance from the Harvard Kennedy Government Improvement Lab in constructing and executing an SIB project to address its greatest unmet service need at the time— parent and caregiver substance use, according to DCF Chief of Staff Elizabeth Duryea.

Launched in September 2016, the state’s Family Stability Pay for Success Project provides 500 Connecticut families in need with in-home clinical services aimed at reducing substance abuse and promoting family stability, according to a document from Social Finance, a nonprofit that served as the project’s intermediary and organizer. Four family foundations, a bank, an insurance company and two nonprofit funds are providing the capital to back the project.

In Connecticut’s SIB model, those organizations will be paid based on measurement of the project’s reduction of out-of-home placement, reducing repeat maltreatment, reducing positive toxicology screenings in parents/caregivers and successful enrollment in family-based recovery, according to Duryea. University of Connecticut Health will initially evaluate the project around March 2018.

“We’re not only enhancing our ability to serve these families; we’re doing it in a way that can really then demonstrate to taxpayers how we know these services actually work, versus funding the same old [programs] year in and year out,” Duryea says.

In 2015, Cuyahoga County, Ohio, became the first U.S. county to institute an SIB-funded program with a similar mission to Connecticut’s SIB-funded project. The county’s Partnering for Family Success Program seeks to reduce the amount of days children spend in foster care, which was one of the more expensive items in the county’s budget.

“We don’t make decisions about [child foster care] placement based on budget… we do what’s in the best interest of the child,” says David Merriman, the administrator of Cuyahoga County Job and Family Services who also helped design and implement its SIB program. “However, we know that placement is just expensive. It can run $20, $40, $100 a day.”

After a customized procurement process was carried out in 2012, the program’s partnership solidified to include 11 entities, according to documents from Third Sector Capital Partners, the SIB’s transaction coordinator. The $4 million SIB funding the project is made up of project-related investments and recoverable grants from five organizations, Merriman says. One foundation funded a pilot program for the project that launched in July 2014.

After three years of programming (the county’s about to finish its second year), Case Western Reserve University will conduct a two-year assessment to determine success and payments to investors, Merriman says. Those payments — which will ultimately be made in the project’s sixth year — will be based on reduction in “combined number of out-of-home placement days for children,” as compared to a control group, the document shows.

Cuyahoga County will pay $75 per reduced day, with a 25 percent reduction marked as the break-even point for investors. Merriman says that the success payments made would come from the county’s savings as a result of the program’s implementation.

The SIB-funded project’s creation and implementation were executed very transparently, Merriman says. The procurement process was open to all bidders, the county sought open input from the public and the foundation community on the project, the public was made aware of the project and communication lines concerning the project were consistently open across county agencies. Merriman attributes this transparency, the collaboration between members of the P3 and command of project-related data as the key success factors behind Cuyahoga County’s SIB project, as well as any SIB project.

“We feel like this is an important strategy for the future,” Merriman says. “This isn’t going to work for every sort of government-funded program… but we’re really committed to helping the sector develop and supporting other counties to really consider if this is a good idea for them.”