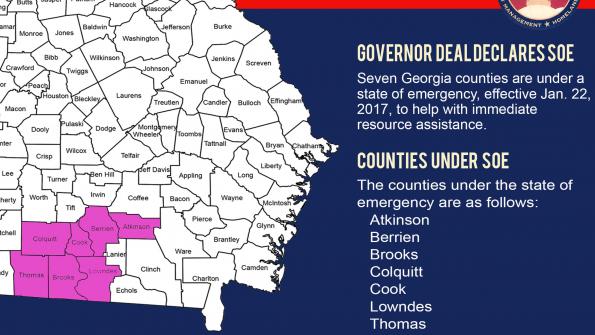 Severe storms slammed several states this past month, leading governors to declare states of emergency for numerous counties and emergency personnel to deploy aid to these areas.

Severe storms slammed several states this past month, leading governors to declare states of emergency for numerous counties and emergency personnel to deploy aid to these areas.

Georgia Governor Nathan Deal declared a state of emergency for seven counties in southern Georgia after the area experienced deadly weather on Sunday morning that killed at least 18 people, NPR reports. The declaration has led the Georgia Search and Rescue Task Force 2 and the Georgia Departments of Public Health, Natural Resources and Public Safety to assist in disaster recovery, according to a news release from the Georgia Office of the Governor. Additionally, the Georgia Emergency Management and Homeland Security Agency (GEMHSA) has stepped in to coordinate all disaster recovery.

“These storms have devastated communities and homes in South Central Georgia, and the state is making all resources available to the impacted areas,” Deal said in the news release.

Across the country, three severe storms that battered California killed four people and led to California Governor Jerry Brown declaring a state of emergency on Jan. 23, RT reports. In the declaration, which was made for 50 counties, Brown directed Caltrans to obtain assistance from the Federal Highways Administration and for the state Office of Emergency Services to give aid to local governments, per a news release from the California Office of the Governor.

“The storm damage, by reason of their magnitude, are or are likely to be beyond the control of the services, personnel, equipment, facilities of any single local government and require the combined forces of mutual aid region or regions to combat,” Brown said in a news release.

Ice storms in early January prompted a few governors to preliminarily declare states of emergency to mobilize resources in advance. A potential ice storm led Alabama Governor Robert Bentley to declare such a situation on Jan. 5, according to AL.com. Bentley in turn directed the Alabama Emergency Operations Center to activate to level three, the Alabama National Guard to activate 300 soldiers and several emergency management divisions to activate in order to coordinate local storm response.

“I have issued a State of Emergency to ensure all available state resources are ready to be deployed if and when it is deemed necessary,” Bentley said in a news release.

The Missouri Department of Transportation brought in over 1,500 trucks to treat roads across Missouri before the storm, while crews prepared generators and chain saws for any potential damage. In Oklahoma, state agencies made disaster-related purchases and coordinated preparedness efforts with state and local officials.