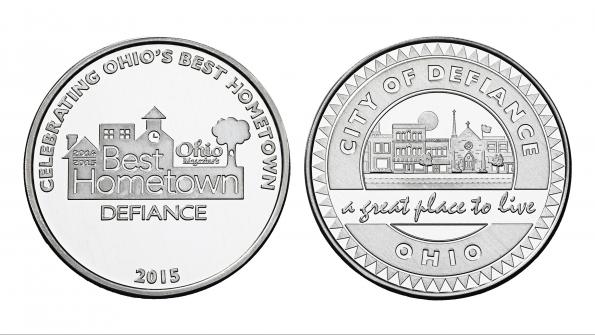 The Defiance, Ohio, Development & Visitors Bureau (DDVB) has found a unique way to celebrate their city — by commissioning a commemorative silver coin.
The Defiance, Ohio, Development & Visitors Bureau (DDVB) has found a unique way to celebrate their city — by commissioning a commemorative silver coin. Originally designed as a souvenir for bicycling tourists, the coins became so popular that the mayor now hands them out to visiting dignitaries and to the people that make the town unique.
In 2015, the DDVB received the news that the Great Ohio Bicycle Adventure would be coming through Defiance and stopping for a day to relax in the town. For five days in June every year, 2,000 bikers tour Ohio, stopping along the way in each town. In years past, the DDVB organized tote bags as souvenirs, but Cindy Mack, executive director of DDVB, had an idea for a more memorable souvenir.
Mack ordered the coins from Osborne Coinage of Cincinnati. The coin features “City of Defiance: A Great Place to Live” on one side and a logo recognizing their Best Hometown award from Ohio Magazine. Osborne specializes in custom orders, and was able to produce the coins just as Mack had designed them. She ordered 1,750 pieces, adding up to $1,357.85 — less than a dollar per coin.
As opposed to just handing the coins out, she designed a scavenger hunt through the town, where the bikers visited specific locations and filled out a card along the way. When they returned the card, they were awarded a coin. By putting in additional effort, the visitors perceive the coin as having additional value — and Mack got to show off her hometown. The bikers enjoyed the small size of the piece — a coin is much easier to fit in a bicycle basket than a tote bag — and will remember Defiance each time they see the coin.
Shortly after the last bicyclist had departed, Defiance High School won the state championship in baseball. At a celebration to honor the victorious Bulldogs, the winning team members were each given a coin. The mayor even hands them out to visiting dignitaries, who prefer the silver coin to the mayor’s old souvenir: a comb (the mayor was formerly a barber).
The Defiance Development and Visitors Bureau is reaping the benefits of a small investment. Commemorative coins can be easily given away, because they are inexpensive but perceived as having a high value. Defiance is one of a kind — not many cities have their own coins. It makes sense: a unique way of commemorating a unique place.
Osborne Coinage: www.osbornecoin.com.
Tags: Smart Cities & Technology Article