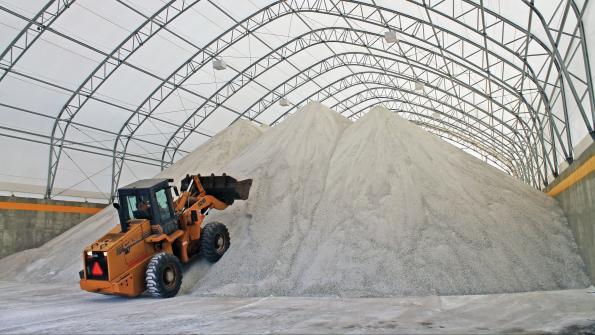 The Illinois Department of Transportation (IDOT) – Pontiac Maintenance Facility District 3, is one of several strategically placed facilities throughout the state that maintains state-owned roads, highways and bridges. This facility has been in continuous operation since the late 1950s.

Before 2015, the Illinois Department of Transportation (IDOT) Pontiac Maintenance Facility District 3’sIDOT’s salt had generally been stored in traditional salt domes or smaller salt-box style, open front bins. The dome buildings may require substantial maintenance over the life of the building. In addition, the volume of stored material is limited by the diameter of the dome, generally allowing for only 2,000 to 2,800 tons of stored salt per building. With storage capacity in mind, the IDOT began to consider a larger, fabric structure building aiming to replace the dome building being used in their Pontiac location.dDue to maintenance issues and the domes’ capacities, IDOT began looking for a better solution. It was decided that larger fabric structures would replace the domes.

Jeff Baity of Matocha Associates, who was the project designer and manager on the project explains, “The objective of this building was to provide an alternate building style that has a more effective dollar-storage volume capacity rate, while also having lower maintenance costs long term.” Baity adds, “The goal was to construct one building capable of storing 10,000 standard tons of salt, which would be compatible to the Illinois Department of Transportation’s operations.” By comparison, this volume of salt would take four-five conical dome structures to house; the fabric alternative would save the department money.

Baity presented three manufacturers capable of executing the project to the contractors, and they ultimately chose an 83-foot-wide by 198-foot-long ClearSpan fabric structure. Regarding the contractor’s decision, Baity says: “From the perspective of the designer, the sales and tech team at ClearSpan by far outperformed the other manufacturers in terms of supplying critical information for our design.”

The fabric buildings have no internal support posts, providing the IDOT with room for 10,500 tons of salt and an additional 4,000 square feet for equipment storage in the off-season. Baity says, “I was able to provide IDOT with a building capable of holding their salt quantities, while also providing them with a 100 percent indoor work environment.”
Another benefit of the ClearSpan building is the abundance of natural light provided by the fabric cover. The IDOT chose the heavier 28-ounce vinyl fabric cover, and Baity reports, “You do not need to turn a light on in the building, even on rainy days.” The IDOT can now work inside the building all day and never have to use any energy to illuminate it.

Baity has checked in with the staff at the IDOT’s Pontiac location and reports, “They thoroughly enjoy the work environment the building provides and I’m told even the delivery drivers like the building, because of its spacious interior and ease of staging and dropping their loads.” Baity adds,” The real benefits will come this winter during the first major snow event. Plow drivers and the loading operator have never experienced indoor loading of their trucks and it should really help expedite the process.”