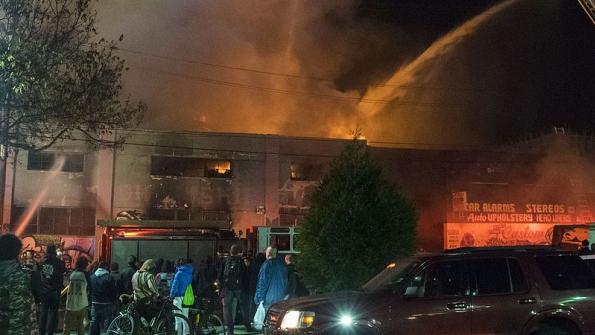 Burned Oakland warehouse received complaints for years; officials disagree on how to proceed

For years, Oakland, Calif. officials had fielded complaints about the warehouse in which a deadly fire killed over 36 in early December. Now, question of accountability linger in the city as officials disagree on how to proceed.

For years, Oakland, Calif. officials had fielded complaints about the warehouse which recently burned, killing over 36 in early December. Now, questions of accountability linger as officials disagree on how to proceed.

The Oakland government was aware of safety and fire hazards in the building for two years prior to the incident, the LA Times reports. The building had been converted to serve as an artists collective known as the Ghost Ship, but it didn’t have the permits or inspections necessary to make the changes legal, according to the LA Times and the East Bay Times.

Federal authorities now believe that overloaded electrical lines at the back of the building sparked the fire, the East Bay Times reports. The warehouse reportedly had electrical wires strewn across it, which were prone to sparking.

“I think we have to take responsibility and certainly our staff members that had that task were not as responsive or assertive as necessary,” Oakland City Councilman Noel Gallo told the LA Times.

Nearby residents had contacted the city about piles of trash and debris, in addition to general unsafe conditions, according to the LA Times. Other complaints were made about an adjacent lot, which had become infested with oil containers, pests, trash and old cars, CNN reports.

Oakland building inspectors started an investigation into unlawful structures inside the building itself three weeks before the fire, but the inspectors were unable to access the building during a visit and didn’t follow up, according to the East Bay Times.

In the Ghost Ship fire’s wake, San Francisco Bay Area cities have sent inspectors out to find more buildings with strong potential for fire risk, according to the San Francisco Chronicle. Oakland has received many complaints about such buildings, and an Oakland official said the city was responding to them.

However, Oakland has opted not to send inspectors into the city to proactively look for such buildings. Oakland Mayor Libby Schaaf, a champion of the local arts scene, has vowed not to start “witch hunts,” but she has said the city is taking “proactive next steps” to prevent a repeat of the Ghost Ship fire.

Rather, Schaaf believes such illegally converted spaces should work with the city to ensure better agreement with building codes.

“As government, we can never turn a blind eye when it comes to safety,” Schaaf told the Chronicle. “We don’t want these underground living, working and performing spaces to go further underground out of fear. We need them to come into the light and work with us.”

Schaaf’s views aren’t shared by all Oakland officials, the Chronicle reports. Gallo said the city should be more active in searching out illegally converted buildings.

“I cannot direct people to do that, [and] when I go straight to the administration, they tell me they are going to look into it,” Gallo told the Chronicle.

However, the rest of the Oakland City Council has not commented much on the issue, the Chronicle reports. Councilman Larry Reid said, “we’ve been asked not to say anything” on inspection protocols, but he wouldn’t tell who asked the council to remain silent.

Within days of the fire occurring, Schaaf announced the creation of a $1.7 million grant in philanthropic funds to create a financial and technical assistance program that will help arts organizations in danger of being displaced, the East Bay Times reports.