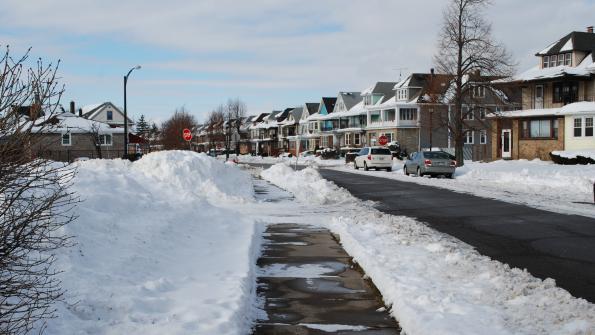 Winter is coming, and cities, counties and states across the U.S. are buying more snow-removal equipment and using technological means to bolster their snow removal programs and related public communications.

Winter is coming, and cities, counties and states across the U.S. are buying more snow-removal equipment and using technological means to bolster their snow removal programs and related public communications.

Seattle is enlisting its community to help with snow management through hosting a snow-related hackathon in mid-December, GeekWire reports. The hackathon will host 30 designers and developers  as well as a sampling of Seattle residents to dream up strategies for utilizing the city’s data in communications with the public during snow- and ice-related emergencies.

Buffalo, N.Y. has bought about $1 million in new snow equipment that will handle snow on the roughly 800 miles of roads in the city, local TV station WGRZ reports. The purchases include two tractors, a Hi-Lift and four snow plows. The city’s public works department focused on buying smaller snow plows this year, as they are better able to deal with snow on side streets, which citizens complain about the most.

The new investment adds to the $9 million that the city has invested in snow equipment over the past decade.

"We like to describe our operation as hard work and high-tech," Buffalo Mayor Byron Brown told WGRZ. "We have some of the hardest-working employees in the entire nation, and we have added a lot of technology to our operation over the past several years."

Other governments are upgrading existing equipment. All 697 of Nebraska’s snow plows are being given tracking upgrades that will monitor their positions and the amount of salt and brine they distribute during winter storms, the Lincoln Journal Star reports. Officials hope the move will allow the state to better use its highway clearing tools and to ensure that anti-snow materials are spread evenly and effectively.

Elsewhere in New York, a city has installed similar tracking equipment on its snow plows. Additionally, Rochester has introduced functionality that will allow its residents to track those plows in realtime, while figuring out parking and which fire hydrants need to be dug out of the ground, according to the Democrat & Chronicle.

The functionality is offered through a series of city-released mapping apps, the D&C reports. One, PlowTrax, tracks Rochester’s 150 GPS-enabled snow plows and shows which streets were cleared at what time. This app works both on desktops and on mobile. An online map highlights streets where parking is prohibited during emergencies.

Another app, Adopt-A-Hydrant, allows people to agree to remove ice and snow from around a fire hydrant so that firefighters can reach it.