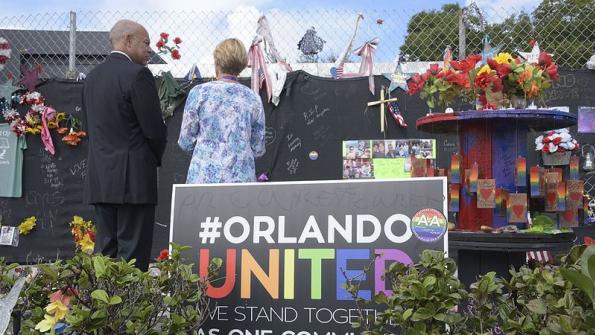 Pulse nightclub owner to not sell it to Orlando for memorial

The owner of Pulse nightclub in Orlando, Fla., has decided not to sell it to the city, which planned to convert the site of June’s horrific mass shooting into a memorial.

The owner of Pulse nightclub in Orlando, Fla., has decided not to sell it to the city, which planned to convert the site of June’s horrific mass shooting into a memorial.

Pulse, a gay nightclub, was the site of the deadliest mass shooting in U.S. history, with 50 killed and 53 wounded, CBS News reports. Orlando Mayor Buddy Dyer called the event the “darkest day” in Orlando’s history, the Washington Blade reports. Dyer also created the OneOrlando Fund, which has raised $29.5 million that will go towards the attack’s survivors and families of victims.

In the months following the attack, Dyer expressed a desire in purchasing Pulse for $2.25 million and transforming it to serve as a memorial for the victims of the shooting, according to the Orlando Sentinel. He said the city would keep the club in its current form for 12-18 months, while getting community input on what exactly to do with the site.

Dyer told the Sentinel the transformation’s goal would be to “create something to honor the memory of the victims that are deceased [and] those that were injured, and a testament to the resilience of our community.”

While Orlando City Council was to vote on the deal to purchase the site on Nov. 14, the vote was postponed, according to ABC News.

However, Pulse Owner Barbara Poma announced earlier this month that she could not part with the club, according to ABC. Poma opened Pulse in 2004 to serve as a tribute to her brother, who died of AIDS in 1991, CNN reports. The club, named after his heartbeat, was to be a community partner of the Orlando gay community.

“I feel a personal obligation to ensure that a permanent space at Pulse be created so that all generations to come will remember those affected by, and taken on, June 12th,” Poma said in a statement.

While Poma did not announce any concrete plans on what to do with the site, she said in the statement that she wanted to “create a space for everyone, a sanctuary of hope and a welcoming area to remember all those affected by the tragedy.”

Dyer issued a statement noting that he respects Poma’s decision, ABC reports. The statement also said that he’s “hopeful the Pulse site will continue to be a place of hope and healing that honors the victims.”