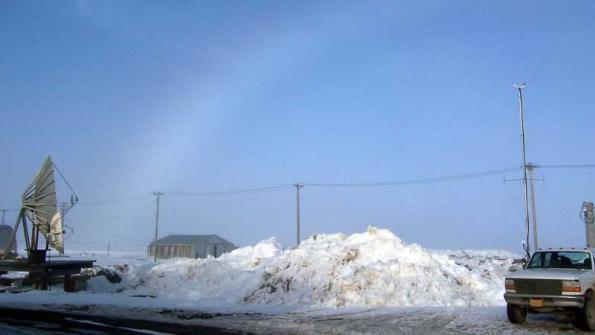 The sun may have officially set for the last time in Barrow, Alaska, as the city is locked in a legal battle to change its name to its original name of Utqiagvik.

The sun may have officially set for the last time on Barrow, Alaska.

On Dec. 1, the northernmost community in the U.S. (population 4,300) officially reverted back to its original name in the local Inupiaq language, according to Smithsonian Magazine. That name — Utqiagvik — means “the place for gathering wild roots.”

Voters approved the name change in October by a six-vote margin, the Associated Press reports. The bill was introduced by Utqiagvik councilman Qaiyaan Harcharek, who said the name change honors the history of the area and the Inupiaq language. Only about 3,000 people in Alaska speak Inupiag, according to NPR.

“It’s important to me and many of us because our language is severely threatened and I think it’s time we begin healing and this is a literal step into to that decolonization,” Hatrharek told Alaska Public Media.

The name change has been challenged in court, however. The local native organization Ukpeagvik Inupiat Corporation (UIC) filed a civil lawsuit against Utqiagvik officials claiming they didn’t notify the public enough about the measure’s introduction on the Oct. 4 municipal ballot, according to Alaska Public Media.

The UIC also claims that the city’s original name is in fact Utkqiagvik. The one letter difference changes the meaning to “the place where we hunt snowy owls.” The lawsuit also claims the name change will cost the city a substantial amount of money due to needed changes in signage, letterhead and contracts, according to Alaska Public Media.

“As far as money being spent on changing signage around town, I believe once we have a clearer idea of what’s actually happening in the court system I’ll have a better opportunity to address that question,” Utqiagvik mayor Fannie Suvlu told Alaska Public Media.

The city council voted on Nov. 30 to bring a vote to potentially repeal the Utqiagvik name in late January, according to Alaska Public Media. Whether the town is known as Barrow or Utqiagvik, it won’t see sunlight again until Jan. 22, Seattle TV station KIRO 7 reports. By sunrise, the name dispute may be settled.

And in case you were wondering, the new name is roughly pronounced lot—kay-ahg—vik, according to the Alaska Dispatch News.