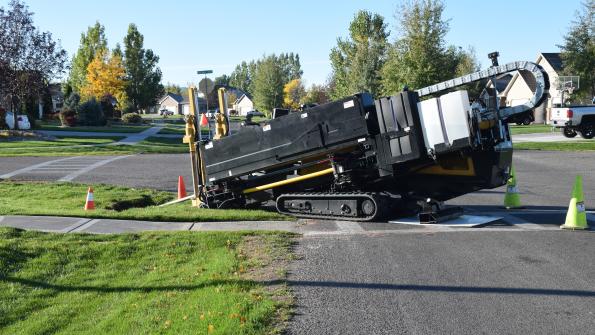 Some Ammon, Idaho, residents can already do this, and Westminster, Md., residents should be able to do so in the next few years. It’s made possible through open-access networking over a municipal fiber network.

Both Ammon (population 14,960) and Westminster (population 18,670) own their respective fiber networks and control the networks’ expansions. However, the cities’ open-access networks differ in operation and implementation.

Ammon’s open-access network was created to integrate its connectivity into city infrastructure and improve it, while stimulating more broadband competition in its area, Ammon Technology Director Bruce Patterson says.

“It just seemed to make sense to make the initial investment and put the fiber in as a one-time cost,” Patterson says. “Then we would have [gigabit] connectivity forever, basically.”

Ammon had set aside $1 million for two grant applications to help fund the initial fiber build out. When the grants were denied, the city used that $1 million to fund initial fiber build out between city buildings and a 10-home pilot project. The city then started a voluntary local improvement district (LID) in May 2016 to deliver fiber to 376 residential properties (approximately 230 have signed up so far).

Ammon is funding the build-out through a fee of approximately $3,000 charged to residents to connect their homes. Once the fee is paid off (immediately or over time as a low-interest bond), the resident owns the fiber connection.

“It becomes an investment in their home,” Patterson says. “Because we are trying to make it clear to them they own it. It’s an asset, it increases their home’s value and they will have choices in providers that they do not have today.”

Changes in connection speeds don’t affect Ammon’s network maintenance costs, so the city charges customers for monthly access to the fiber, not bandwidth itself. In this sense, Patterson says Ammon is treating its fiber like a true utility.

Westminster has its sights set on a similar open-access municipal fiber network model to provide a multitude of services without much commitment to residents.

In Westminster’s model, the city owns and builds out the fiber network infrastructure. However, a private company called Ting serves as the network’s operator and wholesaler, Westminster City Council President Robert Wack says. In this role, Ting connects customers with the network, bills them and handles ongoing customer service. Ting is currently the network’s sole Internet service provider and leases network access from Westminster.

Once Ting meets certain milestones related in part to growing its customer base, it will begin leasing network access to other service providers, who will offer their services to customers via the fiber network. Wack estimates that Ting will begin acting in this wholesaler role in about three years.

“The end state is that we will have multiple providers using the same fiber network to create a real choice for our residents without any barriers to switching,” Wack says.

Currently, Westminster’s fiber network passes about 400 premises, which include residences, government buildings, businesses and open lots. Fiber passing over 2,000 residential buildings and lots is currently under construction, and Wack says Westminster will likely connect all of its residences and businesses to the fiber network in two to three years. Westminster is financing the network’s construction through a $21 million general obligation bond, according to a report by the Institute for Local Self-Reliance.

Christopher Mitchell, a co-author of the report and director of the Institute for Local Self-Reliance’s Community Broadband Networks Initiative believes the general open-access municipal fiber network model could be replicated in other cities, but not without challenges. He cites Ammon’s low amount of broadband competition and Ting’s willingness to assume some risk in Westminster as major advantages for both cities.

“I think that the idea of having a model in which multiple providers use the same network can expand, but it’s going to be incremental,” Mitchell says.  “And it’s not going to be in the same exact way that Westminster and Ammon have done it.”

Wack concurs, saying there are many paths to creating an open-access municipal fiber network.

“A community that’s interested in doing this doesn’t even necessarily have to do it how we did it or how Ammon did it,” Wack explains. “They can figure out their own way to do it… the biggest barrier to getting this done is a psychological barrier.”