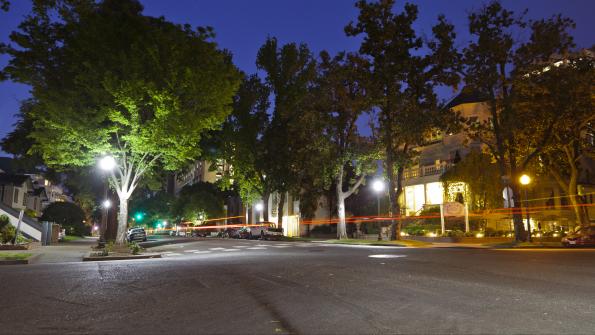 Streetlight conversions to LEDs continue throughout the country

Greer, S.C., recently replaced 128 high-pressure sodium (HPS) streetlights with LED lights in Greer Station, its historic downtown district, the Spartanburg Herald-Journal reports. The upgrade is expected to save about $5,000 per year in operations costs.

“The difference is very noticeable," Greer City Administrator Ed Driggers said in a statement. “City residents and visitors will be excited to know that this is simply the first step of beautification and infrastructure improvements in Greer Station in keeping with the community master plan.”

City officials plan on upgrading the streetlights along the city’s portion of Highway 29 next year, the Herald-Journal reports. Greer Commission of Public Works Chairman Perry Williams cited LEDs’ long lives and lack of toxic chemicals as advantages of LED lights.

Across the country, Prosser, Wash., officials have replaced 400 of their HPS streetlight fixtures with LEDs, the Yakima Herald reports. Not only is the switch expected to save the city $56,000 in power costs, but the new bulbs use between 42 and 168 watts, compared to the HPSs’ output of 100 to 400 watts.

“There are a lot of people who have noticed that they can see the sky better at night,” Prosser Public Works Director L.J. DaCorsi told the Herald.

A Washington Department of Enterprise Services grant paid for most of the $407,000 streetlight replacement project, the Herald reports. Of that amount, Prosser had to match 10 percent of the total cost.

Big cities are moving towards LED streetlights, too. San Francisco has issued an RFP for an installation of 18,000 LED lights that’s due by Nov. 4, according to the San Francisco Examiner.

“We have had trouble getting this program off the ground, but it is close to coming to a milestone point here with this Nov. 4 bid response due date,” San Francisco Public Utilities Commission Assistant general manager of Power Enterprise Barbara Hale told the Examiner.

Concerns have been raised about LEDs’ potential oppression of visibility and sleep cycles. But San Francisco plans to bypass these proposed detriments by purchasing 3,000 color temperature lights, the Examiner reports. Proponents of LED lights in the city have said that brighter lights could also be a crime deterrent.

“We are really looking forward to seeing the financial savings both in less maintenance cost and less energy used and also the perceived safer streets because of the brighter quality of the light,” Hale told the Examiner.