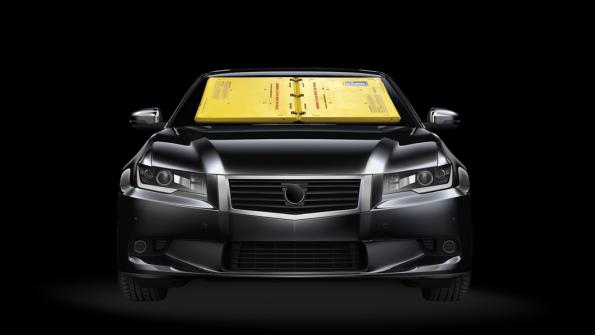 Old parking enforcement technology gets the boot (with related video)

Motorists who haven’t paid their parking tickets may find their cars virtually undriveable when the Barnacle is attached to the windshield.

Parking scofflaws: Watch out for the Barnacle. Motorists who haven’t paid their parking tickets may find their cars virtually undriveable when the Barnacle is attached to the windshield.

The Barnacle is an opaque yellow plastic rectangle that latches on the windshield and blocks the driver’s view. Two commercial-grade suction cups that withstand 750 pounds of force secure the device. The unit also has an integrated pump.

Don’t even think about trying to drive with the enforcement tool attached to the windshield. The product senses movement and will sound an alarm if it detects that a car is in use while it’s attached. A built-in anti-tamper alarm also can sense when someone is attempting to illegally remove the device

But here’s where the device offers some convenience compared to the boot, wheel lock, clamps and other tools that immobilize offenders’ vehicles.  The user-friendly, lightweight Barnacle displays a toll-free number so that the driver can pay fines over the phone. Motorists are then given a release code to detach the device from their vehicle and then given a 24-hour deadline to return the unit to a drop-off facility. The device folds up and can be easily stored in the trunk of a car for delivery to the drop-off location.

For motorists whose vehicle has been immobilized by traditional technology, such as a boot, they usually have to plan for an hours-long wait for their boot to be removed by a parking enforcement officer.

Traffic enforcement is safer with the product, according to the company. With traditional devices, parking officers may put themselves in a dangerous position to install them. The Barnacle weighs 20 pounds and officials can attach it from the sidewalk instead of kneeling down in busy traffic to latch traditional devices onto the wheel. In addition, officers no longer need to haul/carry unwieldy parking boots that typically weigh 40 to 45 pounds. The Barnacle can be stacked, allowing for 10 or more devices to be stored or transported in the same amount of floor space taken up by one boot. The photo to the right shows how the product stores in vehicles.

Because it attaches to the windshield, it can be towed with the device engaged, eliminating the duplication of effort and resources necessary when the situation escalates to towing. The unit sets up quickly and easily, so enforcement bureaus can saturate the enforcement area, allowing for more complete and reactive coverage.

The Barnacle is being tested in 60-day trials underway in Allentown, Pa., and Fort Lauderdale, Fla.  The original list price was $600 per unit. According to the company web site, orders of 10 or less cost $499 per unit, while orders of 10 or more $480 per unit.

Kevin Dougherty, president of Barnacle Parking Enforcement, the firm that markets the unit, lists some of the product’s features for GPN:

–The product’s design allows it to improve the process for everyone involved by making it easier to transport and store, safer and faster to deploy, and removable by the motorist so they can get on with their day faster.

Dougherty says the product can reduce costs for municipalities by allowing them to use existing resources to transport and deploy the device. He says traffic enforcement officers can transport the devices on bicycles or smaller enforcement vehicles. Dougherty adds: “Because the agent does not need to return to collect the device, you can essentially double your enforcement capacity with existing personnel.“

Dougherty says city officials have shown a lot of interest in the product. “They see the potential for greener, more efficient operations, a safer work environment for their enforcement personnel, and the potential to increase revenue while reducing costs,” Dougherty tells GPN.  He says his firm plans to run more pilot program to demonstrate the product in the coming months.

Dougherty says the product’s list price is on par with the prices of existing enforcement devices. Concerning pricing, Dougherty adds: “We have plans to allow for little or no upfront cost to the municipality.”

In the video, see some of the Barnacle’s features, and how it may change the way parking is enforced.