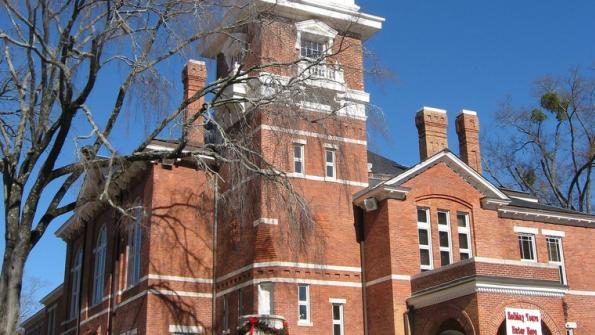 As more citizens are showing up across the country to cast early ballots for the presidential election than in previous election years, counties are preparing for the deluge of voters in several ways.

As more citizens are showing up across the country to cast early ballots for the presidential election than in previous election years, counties are preparing for the deluge of voters in several ways.

About 32 percent of votes across the country were cast prior to Election Day in 2012, according to Michael McDonald, a University of Florida associate professor of political science who runs the election information tracking United States Election Project. Speaking to National Public Radio, McDonald said he projects 34 percent of the votes for the 2016 presidential race to be cast early.

“[In] some of the key battleground states like Florida, North Carolina, Ohio, Iowa, Colorado and Nevada – you could see 50 percent, even two-thirds or more of the votes cast prior to Election Day,” McDonald said.

"We are expecting bigger crowds, and I think it's important everybody get out and get their voice heard," Dallas County Judge Clay Jenkins told Dallas TV station WFAA. "Last time, we had 25 early voting locations. This time we'll have 50."

Early voting is set to begin on Oct. 24 and will end on Nov. 4, according to the Morning News.

"This is an effort to make voting easier for our population and decrease those long lines that people experienced last time,” Jenkins said. “Each election we see about three or four percent more of the vote go to early vote.”

The county’s IT security team has also instituted a robust system for providing voting security. Hardware and firewalls protect the voter registration system and network, the registration database has a backup on a secure offsite server and new security cameras line all board operation locations.

Additionally, the tabulation system isn’t connected to any outside system, and the board’s headquarters house a backup tabulation system, WKYC reports. The county’s IT security team is also monitoring all systems to ensure optimal operation.

"This is our Super Bowl… we've been preparing for this for months,” McDonald told WKYC. McDonald predicts 45,000 in-person early voters, about 8 percent of the 600,000 Cuyahoga County residents he expects to vote in the election.

However, not all counties have correctly anticipated such high voter turnout.

Over 2,000 early votes were cast in Gwinnett County, Ga. in the first one-and-a-half days that early voting was opened in Georgia, the Gwinnett Daily Post reports. By mid-day on Tuesday, Oct. 18 — the second day that early voting had been open — the wait time for casting votes was about two-and-a-half hours.

The wait time was down from the Monday’s wait of three hours, the Post reports. While voting began that day at 8 a.m., voters had begun lining up at 6:30 a.m.

“This has been extraordinary,” Gwinnett County Voter Registration and Elections Director Lynn Ledford told the Post. “There have been many more people than I anticipated. I thought this would happen in the second week (of early voting) — not the first.”

Ledford said those who choose to vote in person should expect long lines. She’s begun suggesting voting by mail to avoid the wait and the heat that came with it — temperatures were in the low 80s on the morning of Oct. 18.

“Many people say they don’t want to vote through the mail because they feel their votes won’t be counted unless it’s a close race,” Ledford said. “But they will be; we’ve sent out about 14,000 ballots already.”