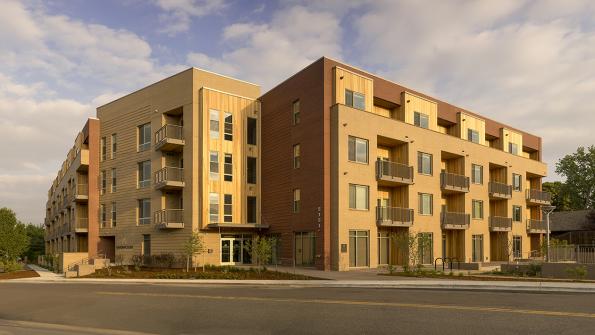 City and County of Denver Mayor Michael Hancock (photo to the right) has proposed a plan to create 6,000 affordable housing units in the city over the next 10 years. A total of  $150 million in local funding would be spent over a 10-year span to help create the new units.

“As Denver works to meet the demands of a growing city, we’re working to create, protect and rehabilitate affordable housing units,” the mayor tells GPN. The mayor lists some of the strategies the city will use to reach its goals:

The mayor is considering asking the City Council to create a development impact fee and to raise property taxes in 2017.

Developed by Koelbel and Company and Mile High Development, the $14.7 million project is located steps away from light rail at Yale Station. Finance partners include the Colorado Housing and Finance Authority (CHFA), and the Denver Transit Oriented Development (TOD) Fund, which helped the Urban Land Conservancy to acquire the property several years ago and thus preserve the key site for affordable housing.

“We’re proud to see people enjoying the benefits of affordable housing at our transit stations and the access to mobility choices that come along with it,” Mayor Hancock said at the ribbon-cutting. “Through projects like this, the Denver TOD Fund is helping connect hard-working residents to their housing, jobs and more through our transit system.”

The four-story building includes one-, two-, and three-bedroom units for households earning up to 60 percent of the area median income (up to $33,660 for a one-person household).

Garden Court at Yale Station is the latest development to be created under the mayor’s “3×5 challenge.” Announced in mid-2013, the challenge calls for the development, rehabilitation or preservation of 3,000 affordable housing units over five years. The city and the real estate development community have produced 1,899 units thus far, and an additional 1,039 units are currently under construction.

To mayors in other cities, Mayor Hancock says: “I would advise other local governments to examine actions they can take to encourage development and preservation of affordable apartments, rental and for-sale units in their areas, including maximizing the potential behind public and private partnerships.”

Total building construction spending (including public works construction) is expected to grow around 6 percent this year, and stay in that range for 2017, predicts the American Institute of Architects in a recent forecast.

Spending on architecture, construction and engineering services by governments is moving along at a slightly slower pace compared to last year. Read about spending trends in Onvia’s “State and Local Procurement Snapshot, Q2 2016.”

In the video, learn more about Mayor Hancock’s proposal to expand affordable housing opportunities in Denver.