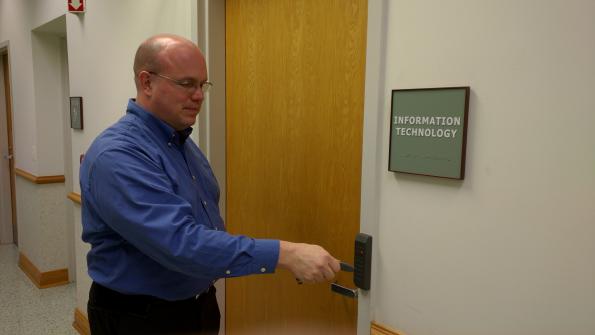 Westmont, Ill., a village on the outskirts of metropolitan Chicago, had been using four separate access control systems to secure the entrances to its municipal buildings. The town’s IT department wanted to consolidate systems, streamline operations and more tightly manage user access privileges. The department also wanted to ramp up security with access control on key interior doors.

When the state offered grant money, the village’s IT Department began searching for a network-based product that would be easier to maintain and easy to deploy. The village also wanted a system that was highly programmable, able to support more credentialing options and improve building security.

Westmont officials chose the AXIS A1001 Network Door Controller, which allowed the village to keep its legacy card readers and keypads, door locks and door position sensors. The AXIS A1001 is an open, non-proprietary platform for access management. It relies on Internet Protocol-based, standard IT equipment. The system has an Application Programming Interface that makes it a scalable and future-proof solution, and it can integrate with other systems and components. The IT department installed network door controllers on exterior and interior doors in five village sites in January 2016. The photo to the right shows components of the AXIS A1001 Network Door Controller and AXIS Entry Manager.

Additionally, the IT Department uses the AXIS Entry Manager product to configure the hardware and update the user directory from any authorized computer on the network. IT also installed two standalone AXIS A1001 controllers with their own independent AXIS Entry Manager to further control user access to sensitive areas.

“The big advantage is not having to re-key every time we have an employee that loses their key or an employee leaves an organization,”  Glen Liljeberg, director of information technology for the village, says. “The ability to eliminate that is great.”

Because the system isn’t complicated to maintain, the IT Department has been able to install and manage it in-house, saving the village an estimated $15,000 a year in third-party service contracts.

Since the network door controllers are highly programmable, IT can not only tightly control who has access to any given door in any given building, but also restrict that access by day of the week and time of day or night.

“The system doesn’t just eliminate a fob. It also provides easier access for employees,” Liljeberg says. “If they have their hands full, it’s much easier for them to hit the door with a fob or card than to pull out a physical key and turn the lock.”

“So in both respects, it’s easier on the organization, but it’s also easier on the employees for accessing the different areas of the building,” he adds.