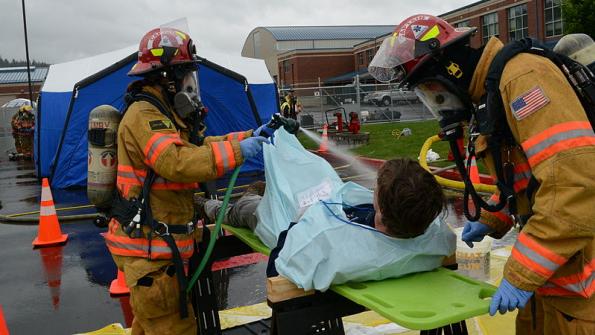 Congress created the First Responder Network Authority (FirstNet) more than four ago and provided it with $7 billion to build and operate a nationwide financially self-sustaining public-safety broadband network (NPSBN).

Congress created the First Responder Network Authority (FirstNet) more than four ago and provided it with $7 billion to build and operate a nationwide financially self-sustaining public-safety broadband network (NPSBN).

On May 31, multiple teams of vendors submitted bids in response to the FirstNet request for proposals (RFP), which requires the winning contractor to deploy a public-safety-grade wireless system using LTE to operate the network. The contractor would also make annual payments to FirstNet totaling at least $5.625 billion over 25 years to fund FirstNet’s ongoing operations and to pay for network upgrades, such as when the system migrates to 5G technology.

Following is a Q&A describing why FirstNet implementation’s is important to cities and counties.

How could FirstNet impact a smart-cities strategy?
Smart-cities technology promise significant benefits and operational efficiencies, but they require a network that ensures robust, reliable communications between key infrastructure, sensors and personnel. That’s especially true for public safety, which has learned it cannot depend on traditional commercial-networks’ availability because it be damaged physically or may be saturated by commercial customers trying to communicate during times of emergencies. With FirstNet, public-safety users are expected to have immediate priority on a hardened network designed to provide a reliable option for first responders to use even after a significant incident.

What is FirstNet’s build out timeline?
FirstNet officials hope to select a contractor and ink a 25-year deal by Nov. 1. Within six month of signing the deal, the contractor must provide service with nationwide coverage using non-Band 14 airwaves—which means that a nationwide wireless carrier likely will be part of the contractor team, according to many observers.

Six months after the deal is signed, FirstNet and the contractor must present a deployment plan for each of the 50 states and 6 territories/districts that outlines how and when the FirstNet system will provide coverage in each jurisdiction.

If a governor approves the FirstNet plan or takes no action within 90 days of the plan being presented, the contractor could begin construction of the Band 14 network as early as next summer.

FirstNet and the winning contractor will develop a draft deployment plan for each state and territory, which will provide the first clue of the potential deployment timeline in each jurisdiction. This draft plan will be shared with the state’s single point of contact (SPOC) and will be subject to review by the SPOC and a group of individuals selected by the SPOC.

Public-safety officials interested in viewing and/or providing input on these proposed state deployment plans should contact their SPOCs.

Will FirstNet be a data-only network, or will it also offer voice services?
FirstNet’s initial deployments will provide public-safety subscribers with LTE data and commercial-grade voice. Mission-critical push-to-talk (MCPTT) services are scheduled to available on the FirstNet system two years after the contractor award is made, likely in late 2018 or early 2019.

Will FirstNet replace existing public-safety land-mobile-radio (LMR) systems?
Eventually, it could—the global MCPTT standard is designed to provide all functionality of current LMR system, as well as additional features not available in LMR. However, note that this MCPTT standard was only approved in March, so compliant equipment still needs to be developed. In addition, public-safety officials want the technology to be tested thoroughly before using it in real-world life-and-death situations.

FirstNet officials say the organization plans only to make the MCPTT available on its network, but each subscribing public-safety agency will have to determine when—if ever—it wants to rely on FirstNet MCPTT services for mission-critical voice communications.

In the meantime, FirstNet’s broadband system and traditional LMR communications are expected to coexist for some time. With this in mind, FirstNet and PSCR are working with vendors to develop solutions that will enable integrated communications between the LTE and LMR networks.

How much will FirstNet services cost?
No one will know what the pricing structure will be until FirstNet’s contractor is announced and the business plan is unveiled. However, there are a few key points to remember:

Will public-safety agencies face other costs related to using the FirstNet system?
Yes. As is the case with commercial-network subscriptions, user devices and applications will need to be purchased separately. FirstNet’s RFP calls for the contractor to support Bring Your Own Device (BYOD) access to the FirstNet system, which could be particularly important to volunteer departments.

Who qualifies as a “public-safety entity” that is eligible to receive prioritized access and most-favorable pricing?
Fire, law-enforcement and emergency-medical-service (EMS) personnel will receive these benefits, but FirstNet’s contractor will determine if any other sectors—for instance, hospitals and utilities—also are considered “public-safety entities.”

Many people reference an “opt-out” alternative associated with FirstNet. What is that?
Under the law that created FirstNet, the governor in all 50 states and 6 territories will have the choice of (1) accepting FirstNet’s plan to build the network within the state’s borders, or (2) pursuing the “opt-out” alternative, which requires the state to build and maintain the radio access network (RAN)—the cell sites and backhaul transport from the sites—within the state while using the FirstNet core network.

Many have criticized the “opt-out” provision as misnomer, because a state cannot choose to not have the FirstNet system built within its jurisdiction. The only choice is whether FirstNet builds and maintains the RAN, or if the state is responsible for the RAN.

If FirstNet builds the RAN, the state/territory has no financial obligations regarding the network.

Under the “opt-out” alternative, the state/territory assumes financial responsibility for building and maintaining the RAN, which includes making technology upgrades—on FirstNet’s schedule—that are designed to ensure nationwide interoperability and security. In addition, the state/territory will have to pay FirstNet for the use of its core network and spectrum.

Revenues generated within an opt-out state can be used to pay for RAN-related costs and to pay FirstNet, but FirstNet’s legal interpretation is that the state cannot keep excess revenues. Meanwhile, if the opt-out network’s revenues were not enough to meet the RAN and FirstNet obligations, the state would have to address the shortfall with funds from taxpayers or another source.

When will governors make their “opt-out” decisions?
Governors will need to make their choice within 90 days of receiving the state plan—probably in late July or August of 2017, if the contractor award is made on Nov. 1 of this year, as scheduled. If the governor takes no action within the 90-day period, FirstNet will proceed with its deployment plans in the state or territory.

If a governor decides to pursue the “opt-out” alternative, the state or territory has to take a series of steps with very challenging timelines before the state can begin deploying the RAN within its borders. FirstNet officials have estimated that the logistics associated with the “opt-out” alternative would delay deployment in a state or territory by two years when compared to FirstNet being allowed to deploy the RAN.

Officials for cities and counties who want to provide input about their governor’s “opt-out” decision should contact the state’s SPOC to get information about the best steps to take.