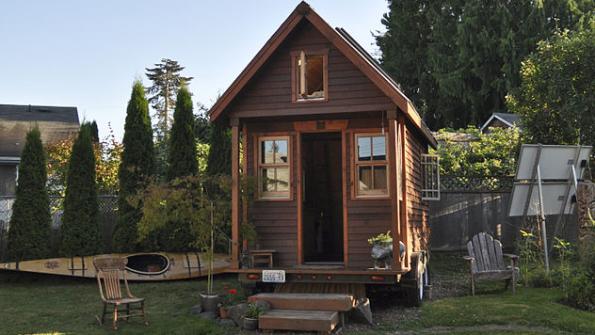 14 Forward may be unlike any community you’ve heard of.

The 12 by 8 foot homes, which are modified Tuff Sheds, have just two single beds and insulation. There is no plumbing or electricity, according to the Sacramento Bee; however, a nearby building called the Twin Cities Rescue Center provides residents with food and showers, with portable toilets present around the site.

“It’s a place to sleep,” Yuba County Homeless Coordinator Chaya Galicia told the Bee. “We want to help them get permanently housed.”

The county used $100,000 of taxpayer money as well as many contributions from charities and corporations to fund 14 Forward, according to KCRA. The community took about six months to build, according to The Daily Mail.

It’s a big change for many of the community’s residents, who had been living in encampments along rivers surrounding Yuba City and Marysville, Calif., the Bee reports.

“They are nervous. They are afraid of us wanting to control their lives,” Galicia told the Bee. “There is one guy who has been down there for 12 years. He’s buried his animals there.”

"One thing about being out here, there's a certain kind of freedom. There's no pressure to make money to pay bills you're not accountable to anybody," Bobby Clyde-Wells, who has lived in the Horseshoe area of the Yuba River Flood Plain for four years, told FOX 40.

The initiative has inspired Sacramento City Council members to voice support for a similar community of tiny houses for homeless people in their city, the Bee reports.

Meanwhile, Los Angeles officials have been on a quest to take tiny houses away from homeless people in the southern part of the city after receiving complaints from locals, according to the LA Times.

“I’m getting complaints from constituents who have to walk in to the streets to avoid them,” City Councilman Curren Price told the Times.

Los Angeles Mayor Eric Garcetti’s spokeswoman, Connie Llanos, told the Times he has made a commitment to get permanent housing and other services for the city’s homeless populace. But Elvis Summers, a former homeless person who built the houses, said it’s a better option for people living on sidewalks.

"It’s not a permanent solution, but nobody is doing anything for shelter right now,” Summers told the Times. “They keep just saying we need permanent housing, but it never happens.”