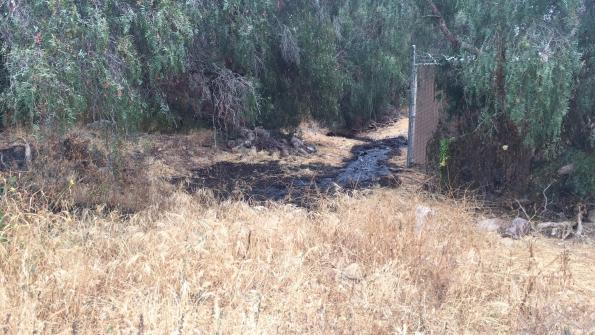 While officials were able to stop the flow from entering the ocean, 29,400 gallons of oil emptied into the Hall Canyon area the Prince Barranca ravine, where it’s currently contained according to The Los Angeles Times.

"It was just pouring out like water coming out of a fire hydrant," Kirk Atwater, a resident who reported the incident to pipeline owner Crimson Pipeline, told the Associated Press.

Officials stopped the flow by utilizing catch basins, The LA Times reports. Officials also shut down a pump house in the area, built a dirt dam to contain the spill, according to the AP.

"We were able to do a damming and diking operation with our agencies working together and stopping the flow of oil from making it even to the city, much less down to the ocean," said Ventura City Fire Chief David Endaya told the AP.

The leak occurred Thursday morning near an underground valve between that had been replaced the day before, according to the AP. This spill marks the 11th spill since 2006 for the pipeline’s owner, Crimson Pipeline, The LA Times reports. Crimson Pipeline owns 1,000 miles of pipelines around the Los Angeles County area, according to The Atlantic.

Crimson Pipeline has sent contractors with booms and other tools to vacuum and mop up the crude oil in cleanup efforts, The LA Times reports. Officials don’t yet know when the cleanup will be completed.