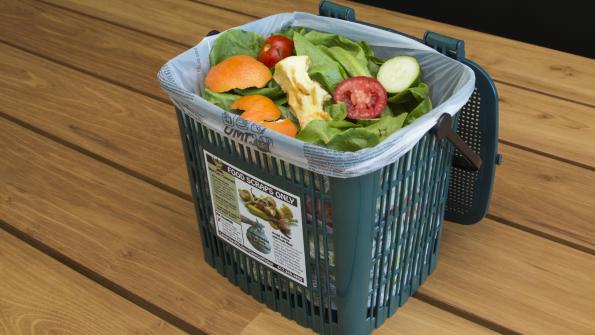 The value in the valueless

Some cities are cutting costs and saving revenue by diverting residential food waste from landfills.

An estimated 33.2 billion tons of food waste – 95 percent of America’s total food waste – ended up in landfills and combustion facilities in 2013, according to the United States Environmental Protection Agency.

It’s an alarming statistic, given unused food waste’s detriment and its benefits if utilized. Rotting food waste emits methane, a greenhouse gas, into the atmosphere. That methane however, can be harnessed as energy if food waste is processed in a device called an anaerobic digester. Alternatively, food waste will naturally decompose into a rich fertilizer  compost if it’s given steadily turning, soil, water and a few months’ time.

Utilizing these by-products and minimizing climate change is compelling cities across the U.S. to adopt municipal composting programs. The programs vary widely; a few cities like San Francisco, Seattle and (starting later this year) Boulder, Colo. require residents and businesses to separate their food scraps from the rest of their garbage.

Many more cities, like Portland, Ore., offer voluntary programs. The Portland government has required refuse haulers operating in the city to offer every-other-week yard waste collection services since 2005. In 2011, the city decided to spur more residents to participate in the program without requiring it, according to Portland Solid Waste and Recycling Program Manager Bruce Walker.

The city did this by requiring garbage haulers to pick up both food and yard waste (plus recycling) once per week, while scaling back trash pickup to once every other week, Walker says.

“Customers are now needing to think through and say, ‘Gosh, this compost cart gets picked up every week. I can put the food scraps out in that’,” He adds. “Thus they won’t have to have it stick around for a couple weeks before the next garbage collection. So there’s a real incentive to have customers to participate in that regard.”

City data shows the composting program’s number of participants jumped from 700 in 2011 to 900 in 2012, and Walker says there’s been a 33 percent reduction in the amount of garbage citizens are taking to the curb.

“We’ve been very pleased at the results to see [not only the public] participation in our programs, but also that public perception of it remains strong as we instituted these changes,” Walker says. “It’s been several years now, and everyone’s back on board.”

Some east coast cities like New York and Cambridge, Mass. have also instituted initiatives. Cambridge Waste Reduction Program Manager Mike Orr says most of the 600 households that signed up for the city’s 15-month pilot program, which ended in September 2015, set their city-given compost bins out for weekly collection.

The city expanded that program in October 2015 to include 5,200 residential buildings of one to 12 units in a specific area. This program is not an opt-in one; Cambridge officials dropped off compost bins to qualifying buildings, and compost is collected weekly.

Orr notes the first week saw a 45 percent participation rate. That rate has increased to about 51 percent in the time since. He expects citywide service for these buildings to start in September 2017.

“We’re hoping to get a little bit better, but we haven’t seen huge jumps since the first day went into effect,” Orr says. “So we’re trying to pick away at that and try and get a couple extra bins out every week.”

Mountain View, Calif. tested two methods in its six-month composting pilot program, which was completed in January. The city split its designated pilot area into two parts; one part implemented a Cambridge-like program. The other was more similar to Portland., according to Mountain View Solid Waste Program Manager Lori Topley.

On April 26, the Mountain View City Council directed officials to explore implementing the more successful Portland-like method citywide. The City Council would likely review the additional analysis and establish an implementation schedule by the end of the year, according to the pilot program review document.

Although reception has been tepid, Topley is positive about the new program, as changing garbage collection days will save the city money. Residents will pay less for compost collection than trash collection, too.

The challenge, she says, will lie in getting residents to change not only their trash-related habits, but also their mindsets.

“Instead of thinking about your garbage as garbage, it really requires you to think about everything that leaves your house as either valuable or not so valuable,” she explains. “What we’re saying is, we want to rearrange the way we pick up stuff from your house, so that you think about it a little bit differently.”