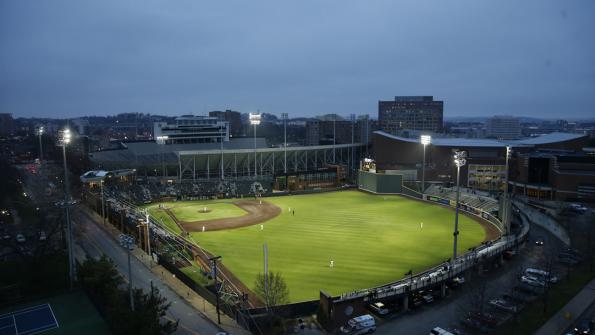 The home field of the Vanderbilt University men’s baseball team, Hawkins Field in Nashville, Tenn., has installed Eaton’s Ephesus light-emitting diode (LED) system. It is designed to enhance the viewing experiences for spectators while reducing energy use by as much as 75 percent. The baseball Commodores opened their season under the new LED system on February 19 against the University of San Diego.

“Our new LED lights make Hawkins Field an even better place to play and watch a game,” says Kevin Colon, associate athletic director at Vanderbilt University. “As we researched the LED lighting options available, it was clear to us that Ephesus Lighting had the best solution from the standpoint of lighting quality, operations flexibility and energy efficiency.”

The Ephesus LED lighting setup offers quality lighting. Through glare-control features, the system’s fixtures shine more uniformly on the playing surface. The lighting arrangement creates a better stage for players and fans both in the stadium and those watching on high-definition television. The versatility of an LED system also allows for operational flexibility and the creation of programmable light shows for fan entertainment. The LED solutions are easy to install, virtually maintenance-free for years and offer facilities the lowest total operating costs compared to other sports lighting systems, according to the company.

“Our recent installation at Globe Life Park, home of the Texas Rangers, Hawkins Field at Vanderbilt and others, illustrates that baseball stadium facility operators are clearly seeing the benefits that our digital lighting solution offers them, as well as their fans, players and broadcasters,” says Mike Lorenz, president, Eaton’s Ephesus Lighting business.

Since lighting the first sports venue with LED technology in North America in 2012, Eaton’s Ephesus Lighting luminaires have been operational for over 200 million hours at indoor and outdoor sports and entertainment venues across North America including the University of Phoenix Stadium (Arizona Cardinals); the Canadian Tire Centre (Ottawa Senators); Bridgestone Arena (Nashville Predators); Duke University; Cornell University and others.  Additionally, Sun Life Stadium, home of the Miami Dolphins, and U.S. Bank Field, the future home of the Minnesota Vikings, are both installing Ephesus systems this off-season.

In the video, executives at the University of Phoenix Stadium offer feedback on the venue’s Ephesus Stadium Series LED lighting. The stadium is home to the Arizona Cardinals