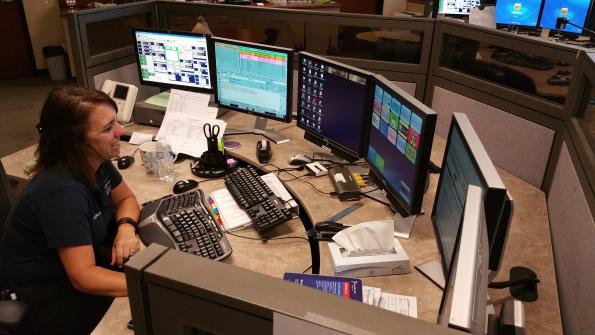 Murrieta went online with Riverside County in July 2015 and began assessing its two-way radio equipment, among other infrastructure. Murrieta Police Department Training and Radio Systems Administrator Cris Martinez, a 31-year law enforcement veteran, took charge of this research. He is in the picture above, with the sunglasses.

These upgrades were a major step forward in protecting personnel, yet a simple thing like radio battery failure could render everything useless. The department’s radios were superior, but their batteries weren’t lasting through a typical 12-hour shift.

“I found Impact Power Technologies at the COPSWEST training event and expo last year, and decided to test their batteries, along with batteries from a few other companies,” Martinez says. “We quickly determined that IPT’s batteries lasted much longer —  about a day-and-a-half longer than the original equipment manufacturer  batteries — and still recharged quickly.”

Martinez recommended that Murrieta convert to IPT, contingent on three requirements: The batteries must cost the same or less than the OEMs, come affixed with a city logo label, and that the batteries be delivered in bulk to be immediately deployed.  IPT accommodated all three requests.

“The customer service was outstanding,” Martinez says.  “With the savings from IPT as compared to the other vendors, we were able to buy double the batteries and 50 percent more chargers. We definitely got more for our money… and more performance too.”

Murrieta officers found they no longer needed to swap out batteries until the end of their second day’s shift. As a result, Martinez referred IPT to other agencies including the Indio PD, the Hemet PD and the Riverside Sheriff’s Department. All have either purchased or are in the process of purchasing IPT batteries and chargers, according to the company.