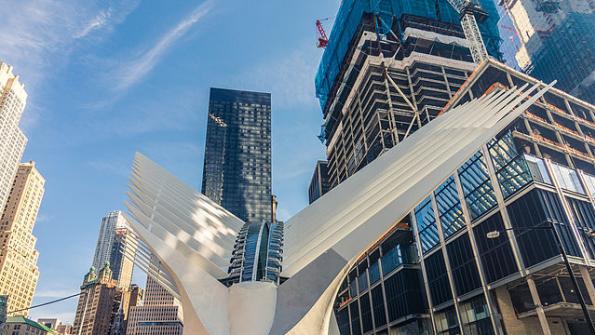 The new World Trade Center transportation hub, which replaces the station destroyed on Sept. 11, 2001, is now partially open, despite an overall tepid response.

The new World Trade Center transportation hub, which replaces the station destroyed on Sept. 11, 2001, is now partially open, despite an overall tepid response.

The hub’s central area and the Oculus — a massive bird-like structure with a retractable skylight adorning the top of the central area — opened on March 3, according to the New York Daily News.

Altogether, the project cost $4 billion and took over a decade to come to fruition. It’s expected to see about 250,000 visitors a day, the paper reports.

“We’ve designed something that we feel will make a mark in the history books and truly be a legacy project,” Port Authority Capital Projects Chief Steve Price told the Daily News.

Nevertheless, the paper notes that the hub opened to “little excitement,” and the Associated Press reports that the Port Authority of New York and New Jersey opted not to hold a celebration for the opening.

The hub did, however, open to a fair share of criticism.

Amid some reserved praise, New York Times architectural critic Michael Kimmelman wrote that the structure  "is a disaster for architecture and for cities” and that it is “a soaring symbol of a boondoggle.”

The hub’s construction cost $2 billion more than originally projected, and the NYDN reports that white Italian marble’s prevalence throughout the station has been singled out as one of the more wasteful elements of the station.

The Port Authority Executive Director Patrick Foye, who is stepping down this month, told the AP that the hub was “a symbol of excess” and that “cost overruns consume precious resources and undermine public confidence."

Plate defended the project’s costs, citing an obligation to create something significant.

“It had to be something that was architecturally special,” Plate told the NYDN. “So we did choose (the marble) because of its quality and what it provides. But also, it’s very durable.”

Architecture critic Paul Goldberger wrote in Vanity Fair that while the hub “cost billions of dollars and (is) still a shrine to the commercial marketplace,” it’s also “a truly sumptuous interior space for the benefit of the public.”

Santiago Calatrava, the Oculus’s architect, echoed Goldberger in his hopes for the station’s public benefit.

"We really hope from the bottom of our hearts that New Yorkers embrace it and love it," Calatrava told the Associated Press.