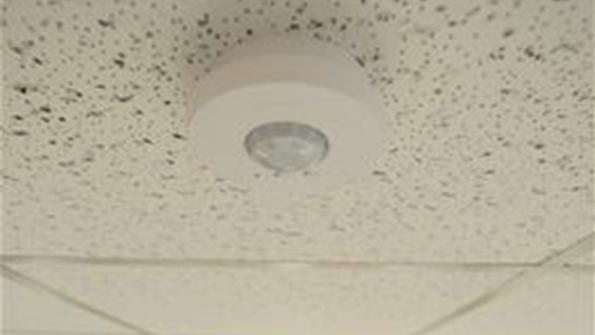 Recently the Niagara Falls Air Reserve Station (ARS) set a goal of reducing energy costs by 3 percent each year. In addition, ARS facility managers embarked on two additional projects that not only reduced energy usage, but also helped the ARS qualify for rebates from its electricity provider.

As a result of the federal Energy Independence and Security Act of 2007, the Niagara Falls Air Reserve Station (ARS) set a goal of reducing energy costs by 3 percent each year. In addition, ARS facility managers embarked on two additional projects that not only reduced energy usage, but also helped the ARS qualify for rebates from its electricity provider.

The first project helped reduce demand on the base HVAC system. ARS managers installed ceiling fans in the warehouses and aircraft hangars to force hot air down to floor level during the winter season. The fans provide cool air movement during the hot summer months. A door interlock system was added as part of the project. It shuts off the HVAC system when the hangar doors are open for a significant period of time.

The sensors have helped the base achieve energy savings. They automatically turn off lights and fans in restrooms, break rooms, fitness areas, conference rooms, storage closets and hallways. Previously, the lights and fans were left on for 12 to 13 hours a day, despite very low levels of occupancy. The energy-saving projects were completed in January 2014.

“The bottom line is that occupancy sensors have saved nearly one million kilowatt-hours annually, which translates to a cost savings of $84,270,” says Major Matt Heinsler, Project Manager at Air Force Civilian Service.

Those savings, combined with the associated $78,655 total authorized rebate from the station’s electrical energy supplier and more than $3,100 savings from the smart power strips, have helped reduce overall costs, Heinsler says.

“Our Special Energy Devices project has already saved more than $166,000 that the station can redirect toward its people and its mission,” he explains.

Savings from the current project will pay for the equipment installation in three to four years, which means that energy saved over the remaining 6-7 years of estimated project life is a direct cost savings that will be directed toward people and programs, not energy costs. It all adds up to a reinvestment opportunity of $75,000 to $100,000 each year.

“Installing sensors typically saves 40 to 60 percent lighting energy, or even more, when they are used in the kind of spaces that the Niagara Falls ARS identified. That’s money that can be better used for people and programs,” says Andy Wakefield, Director of Government Solutions, Lutron Electronics.

“Layering lighting control strategies or using occupancy sensors in conjunction with the HVAC control can often have an even greater impact over time,” Wakefield adds.