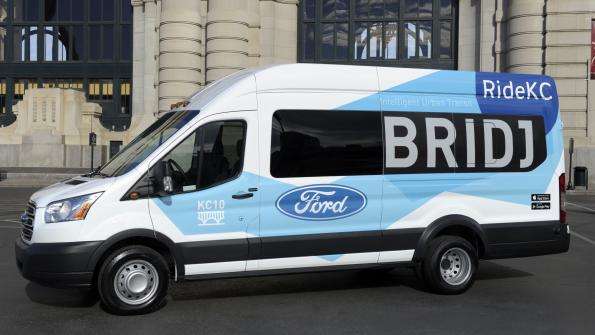 Urban technology company Bridj is teaming up with the Kansas City Area Transportation Authority (KCATA) to launch Ride KC: Bridj. It is a one-year pilot program that will use a network of locally built Ford Transit vans (photo below on left). The program will provide a new way to access areas of Kansas City that are rich in jobs and housing. The project is scheduled to launch in early March.

The public-private partnership brings together a major U.S. transit agency, an automaker and an urban technology company. The goal is to enhance Kansas City’s existing mass transit system by providing greater access and mobility to residents.

“Today, we are bringing another transit option to the region with the introduction of microtransit,” said Robbie Makinen, KCATA president and CEO. “By combining the intelligence of Bridj technology with capable and flexible Ford Transit vehicles, we are creating a seamless and borderless transportation network for our residents that is easy to use, comfortable and affordable.”

Ride KC: Bridj will be powered by billions of data points, Bridj’s platform determines where riders want to go and how to get them there most efficiently. Using the Bridj mobile app, riders can request on-demand shuttle service that they can access via pop-up shuttle stations. The pilot aims to extend the current capabilities of Kansas City’s mass transit system.

Ten Ford Transit passenger vans built at Kansas City Assembly Plant will form the network of shuttles in the pilot program. The fleet of high-roof, long-wheelbase Transit vans with available 3.5-liter V6 EcoBoost engines will be modified with a custom 14-passenger seating layout. The vehicles will have custom-installed large running boards for passenger convenience. Bright logos on the sides will make for easy visibility. Ford Motor Credit Company is supporting the one-year pilot with financing through its municipal lease finance program.

The one-year pilot program initially will include downtown Kansas City, the near east and west sides, Hospital Hill, Crown Center, portions of Midtown, University of Kansas Medical Center and the Historic 18th and Vine Jazz district. It will augment and serve as a gateway to other forms of transit as many pick-up locations will be at bus stops and areas served by existing Kansas City transit and bike-share systems.