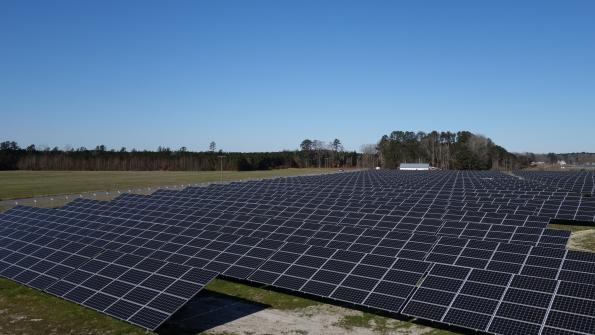 Pocomoke City, Md., calls itself “The Friendliest Town on the Eastern Shore.” Now they can say that includes being environmentally friendly.

Pocomoke City, Md., calls itself “The Friendliest Town on the Eastern Shore.” Now they can say that includes being environmentally friendly.

The idea to put a 2.1-megawatt ground-mounted solar array on a 10-acre unused parcel of land adjacent to the city’s wastewater treatment plant originated with Mayor Bruce Morrison in 2013. The plant became operational in January 2015.

City officials wanted to have the largest municipally hosted solar array in Maryland, and they selected a site they believed most suited to that goal. Officials then selected Standard Solar as the project developer, tasking them with maximizing the solar production from the pre-selected site. The project faced some hurdles, but Standard Solar’s team explored and implemented solutions to successfully address and solve Pocomoke City’s challenges. The company brought in SunEdison to finance the deal.

Environmental benefits of the system include saving 2,067 metric tons of carbon dioxide. This quantity equals emissions from 284 average American homes for a year, or the annual carbon offset of a 1,639-acre forest.

In addition to being environmentally friendly, the plant has been a help to the community’s budget. The city is saving an estimated $52,000 per year (approximately 17 percent) on electricity costs. In addition to powering the city, the 6,150-panel array is also powering four of the city’s non-profits: the Delmarva Discovery Center, the MARVA Theater, the Samaritan Shelter and the Worcester County Developmental Center.

Under a 20-year power-purchase agreement with SunEdison, the city can more easily budget for its electricity use. This is because the agreement keeps power prices fixed for the life of the deal.