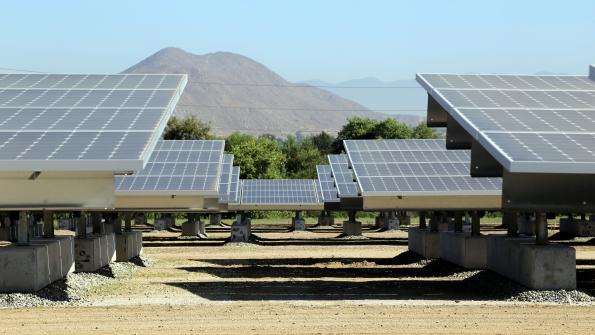 “Riverside reaching the 25-MW milestone is especially impressive because it was not too long ago that one megawatt was an ambitious goal,” Riverside Mayor Rusty Bailey says. “The fact that we are reaching 25 megawatts five years ahead of schedule speaks volumes about our commitment to green energy and sustainability.”

Formed in 2005 by Bailey’s predecessor, Ronald O. Loveridge, the Clean & Green Task Force looked for ways to improve the city’s appearance while making city practices more sustainable. The task force is made up of local leaders and city personnel.

Among the goals the task force recommended was to install at least 25 MW of solar energy generation within the city by 2020. The new 7.5-MW Tequesquite Landfill solar farm, created in partnership with Riverside Public Utilities (RPU) and SunPower, helped the city reach and surpass that 25-MW goal.

“We’ve come a long way from our first solar generation project [a carport shade system at the Utilities Operation Center constructed in 2001] to the nearly 1,700 systems that are online in Riverside today,” the city’s Sustainability Officer Michael Bacich says.