Seattle's Gum Wall came to be in 1991 when Market Theater customers began sticking gum on the wall while waiting in line. The tourist attraction will be cleaned of approximately 1 million pieces of gum this week.

Seattle theater-goers have slapped their last piece of Trident on a wall with the moniker of the “second-germiest” tourist spot in the world.

The rainy city’s Gum Wall in the Pike Place Market will be cleaned of approximately 1 million pieces of gum this week, according to NPR affiliate KUOW. The Gum Wall became to be in 1991 when Market Theater customers began sticking gum on the wall while waiting in line.

Though it has developed into an ode to America’s beloved minty-fresh synthetic rubber, Seattle’s preservation community now fear the gummy display could tarnish the historic status of the Pike Place Market, which opened in August of 1907.

“It was never part of the charter or the history of the Market to have the walls covered with gum,” Emily Crawford, spokeswoman for the market’s Preservation and Development Authority, told The Seattle Times. “Gum is made of chemicals, sugar, additives. Things that aren’t good for us. I can’t imagine it’s good for brick.” 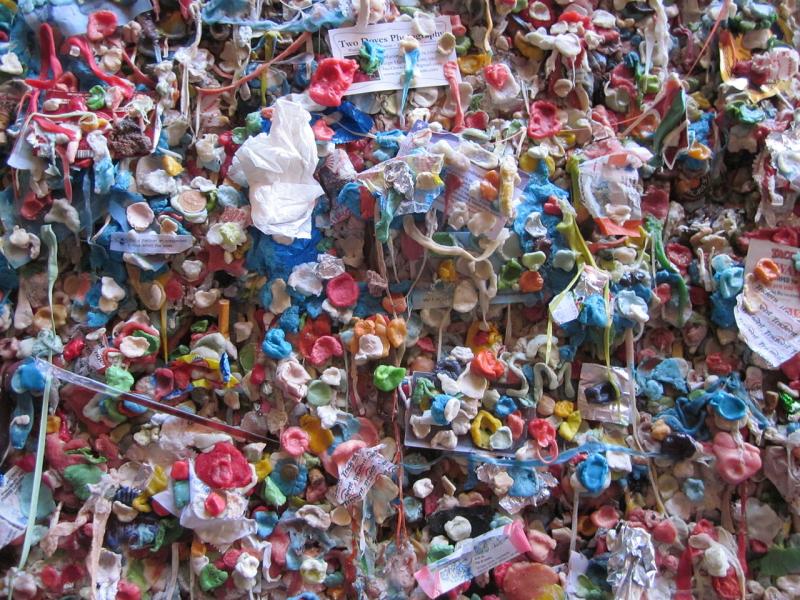 The more than 25 years and upwards of 2,000 pounds of gum will take three days to remove with an industrial steam machine, Kelly Foster of Cascadian Building Maintenance told The Times. The operation will cost about $4,000.

“The machine will melt the gum with 280-degree steam; it will fall to the ground, and a two- to three-man crew will collect the gum in five-gallon buckets. ‘This is probably the weirdest job we’ve done,’ Foster said.” The Times reports.

The industrial strength cleaning will not mean the gum-sticking tradition will die, Mercedes Carrabba, owner of Market Ghost Tours in the marketplace, told the NPR station. She looks forward to seeing a blank brick canvas and watching the art display cultivate all over, again.

“It’s like an organism — it grows back. Or like a lost limb, it returns,” she said. “That’s actually the most exciting part, is having people continue to interact with it. Even if it goes away briefly, it still comes back.”