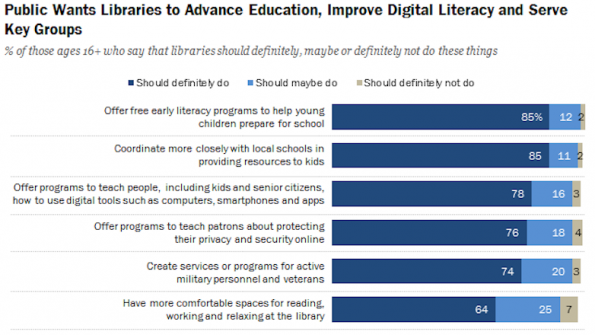 Should libraries move books and make way for tech?

The number of bookworms that peruse the shelves of their county and neighborhood libraries continues to dwindle, but surveyors in a Pew Research Center study say that increasing technology and learning opportunities could change that.

The number of bookworms that peruse the shelves of their county and neighborhood libraries continues to dwindle, but surveyors in a Pew Research Center study say that increasing technology and learning opportunities could change that.

The Pew Research Center gathered responses from more than 2,000 Americans ages 16 and older in spring 2015, and released the results last week. The survey showed that library usage differed based on education level, age and race, but most respondents (65 percent) agreed that closing their local library “would have a major impact on their community.” Respondents were previously polled on libraries in 2012.

About 46 percent of respondents said they visited a library or bookmobile in-person in the prior year, compared to 48 percent that did so in the 2012 survey.  Those that used the libraries resources remotely, through the public library website, in the past 12 months grew to 50 percent from just 39 percent in the 2012 survey.

The most notable finding revealed that 30 percent of respondents, compared to 20 percent in 2012, believe that libraries should “definitely” move print books and stacks out of public locations to make way for tech centers, reading rooms and space for cultural happenings.

The survey also showed conflicting desires of Americans that primarily connect with libraries online, but want the same or more amenities at their physical library locations. For instance, when asked if brick-and-mortar libraries should have a smaller physical footprint in their communities, 64 percent of surveyors said no, which was a slight increase from the response to that question during the 2012 survey.

Respondents to the library survey also expressed desires for their libraries to:

As city councils and county officials determine the significance and value of the, in some cases, aging, long-time institutions of literacy, this survey reveals that the public still considers libraries relevant and worth the investment.