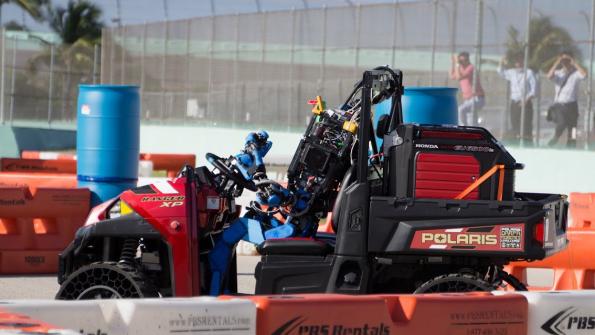 Polaris customized its line of off-road vehicles so it functions as a mobility platform for human or robot drivers. Robots will be driving the vehicles during the DARPA Robotics Challenge (DRC) Finals to be held June 5-6.

Robots will be at the wheel at the DARPA Robotics Challenge (DRC) Finals to be held June 5-6 at the Fairplex in Pomona, Calif. The Defense Advanced Research Projects Agency (DARPA) created the event to spur development of robotic technology that can help humans to better respond to future disasters.

In the competition, human-robot teams will be tested on capabilities that could enable them to provide assistance in future natural and man-made disasters. Fourteen new teams from Germany, Hong Kong, Italy, Japan, the People’s Republic of China, South Korea, and the U.S qualified to join 11 previously announced teams. In total, 25 teams will vie for a chance to win one of three cash prizes totaling $3.5 million at the June event.

Robots will be operating limited edition DARPA Polaris RANGER XP 900 EPS and GEM electric vehicles during the competition. The Challenge Finals will have robots perform a number of tasks in a continuous course, simulating what might be encountered in a real disaster situation. In one task, DARPA will use the RANGER XP 900 EPS to help demonstrate a robot’s ability to operate and to egress from a vehicle, since they are among the tools commonly on hand in disaster zones. Global disaster-relief organizations such as the National Guard, Salvation Army and other first responders already use the RANGER XP 900 in their work.

For the trials and finals, Polaris customized its vehicle line (example on left) so it functions as a mobility platform for human or robot drivers. The vehicles feature a remote SafeStop electronic throttle kill, brake actuation technology and a 1,000-pound-capacity bed for the robot’s power supply. To maneuver the different types of terrains encountered in disasters without running the risk of flats, the vehicles are also equipped with TERRAINARMOR airless tires.

The event promoters are pleased to see the international teams competing. “The diverse participation indicates not only a general interest in robotics, but also the priority many governments are placing on furthering robotic technology,” says Gill Pratt, program manager for the DRC. He added: “As this technology becomes increasingly global, cooperating with the U.S. in areas where there is mutual concern, such as disaster response and homeland security, stands to benefit every country involved.”

In the video, DARPA officials tell how the DARPA Robotics Challenge can make society more resilient to disasters.