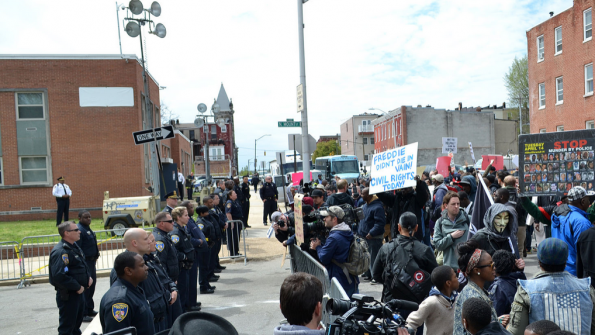 Power and poverty clash in Baltimore

UPDATE: On Sunday, Baltimore Mayor Stephanie Rawlings-Blake lifted the city’s 10 p.m. curfew, and the National Guard began to pull out troops, suggesting the city may be returning to a state of normalcy.

Since Tuesday of last week, Baltimore’s residents lived under five consecutive nights of restrictions imposed by the city’s police force and the National Guard due to unrest connected to the death of Freddie Gray, who died from injuries sustained while in police custody, The New York Times reports.

Baltimore City State’s Attorney Marilyn Mosby announced Friday the six police officers involved with the arrest and transport of Gray will be charged criminally. Protesters have lauded the decision, while police organizations and supporters have decried the decision as politically charged, according to CNN.

The six officers have a preliminary hearing on May 27.

Last night thousands of law enforcement officers and National Guard troops worked to maintain order in Baltimore after riots broke out on Monday.

In an effort quell the violence, Mayor Stephanie Rawlings-Blake imposed a mandatory curfew last night beginning at 10 p.m. The New York Times reports hundreds of people ignored the order, staying in the streets and intermittently clashing with riot police throughout the night.

However, the violence was not as intense and Monday night, and shortly before midnight Police Commissioner Anthony Batts told reporters,“The curfew is in fact working,” adding that 10 people were arrested after it went into effect. “Citizens are safe. The city is stable,” he said. “We hope to maintain it that way.”

Riots in the city began Monday as protests over the case of Freddie Gray spiraled out of control. Authorities report that ultimately 15 buildings and 144 cars were set ablaze after the funeral service for Gray.

The 25-year-old Gray was arrested April 12 on a weapons charge in a high-crime area of Baltimore known for drug trafficking, CNN reports. He “gave up without the use of force,” Baltimore Police Commissioner Jerry Rodriguez said last week. None of the six officers involved in his arrest reported any use of force against Gray.

There is video evidence of an upset but otherwise healthy Gray being led into a police van, CNN reports. However, “when Mr. Gray was taken out of that van, he could not talk, and he could not breathe," according to Rodriguez. Police say Gray was not buckled in with a seat belt during the ride to booking.

Gray died seven days later of a severe spinal cord injury while in police custody. CNN reports it is unclear what caused this injury, and what, if anything happened in the van.

The six officers involved in his arrest have been suspended, which is standard procedure after an “in-custody death” Baltimore Police Department spokesman Eric Kowalczyk told news agencies. He added this doesn’t mean the department feels they did anything wrong – only that they were involved.

In the days following Gray’s death, Batts told reporters “we know our police employees failed to get him medical attention in a timely manner multiple times.” The police and U.S. Justice Department are currently investigating the situation, CNN reports.

The case will be presented to the city’s prosecutor on Friday, who will determine whether to bring up charges against the officers involved, The New York Times reports.

While Gray’s death served as the catalyst for Monday’s riots, some observers believe Baltimore was a powder keg. “It was only a matter of time before Baltimore exploded,” writes Michael Fletcher, a Washington Post reporter and three-decade resident of the city.

In his editorial he describes a city deeply divided on lines of poverty and power. He says the disenfranchised poor are without opportunity, without adequate housing and often without hope. “Now all of the pent up anger and bitterness has boiled over into the kind of rioting Baltimore has not seen since the 1968 uprising that followed the assassination of Dr. Martin Luther King Jr.,” he writes.

At least one city official seems to agree with Fletcher. In an on-the-street interview with Fox News Monday night, Baltimore City Councilman Nick Mosby said the chaos and destruction was the result of the “social economics of poor, urban America.” He said those demonstrating are venting decades of anger and frustration over a system that has failed them.

Watch the full video below.