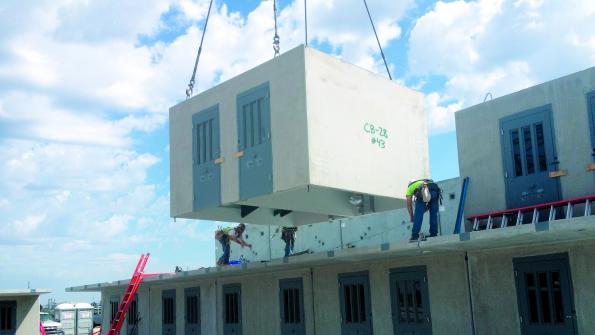 A 75,000-square-foot addition and renovation at the Reno County Correctional Facility in Hutchinson, Kan., includes precast concrete cell modules that were delivered to the site. The $29 million project is scheduled for completion this coming June.

Construction is moving along on a 75,000-square-foot addition and renovation at the Reno County Correctional Facility expansion in Hutchinson, Kan. Crews from Oldcastle Precast (headquartered in Atlanta) have set the last precast concrete cell module at the site. The $29 million project is scheduled for completion this coming June.

The expansion effort includes the construction of a new 75,000 square foot single-story structure. The expanded unit has a 250-inmate capacity. It has space for a variety of prisoners, ranging from minimum to maximum security. The facility will include special needs units, a kitchen, and medical area which includes two negative-pressure isolation cells to prevent the spread of airborne diseases, and a work release area.

The expanded unit is designed so guards can have a direct line of sight into cells surrounding a secure control station from which the officers can electronically lock and unlock doors. A maintenance corridor along the outer perimeter of the cellblock will allow maintenance crews to repair plumbing and other systems without entering the cells. The unit’s design permits the addition of another 40-bed cellblock if it is needed at a future date.

J E Dunn Construction, the general contractor, and Reno County chose precast modular technology as the desired method of construction for the housing units and awarded the precast concrete cell contract to Oldcastle Precast Modular. The prefabricated concrete cell modules, equaling 120 rear chase jail cells, were manufactured at the Oldcastle Precast-Topeka, Kan. plant and shipped to the job site. A photo of one of modules is here, on the right.

The 12 foot 9 inch by 7 foot, two-person rear chase precast cells were stacked two stories high at the site. The interiors of the cells were painted and outfitted with fixtures, including two beds, a table, sink, toilet and four combo shelves. The facility’s plumbing and electricity are already connected to the individual cells.