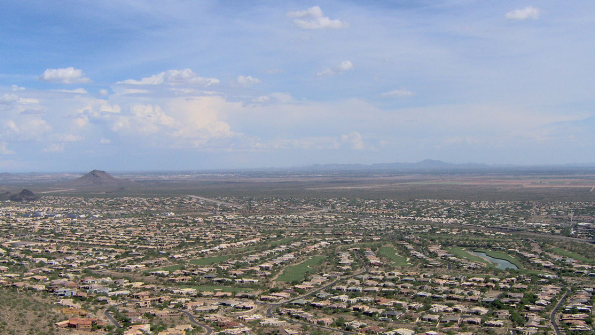 The cost of sprawl

Urban sprawl costs the U.S. economy $1 trillion per year, according to a new report.

Urban sprawl is tremendously inefficient and costly. As people spread out, it takes them longer to get where they need to go, and time and resources are scarified. In quantifiable terms, sprawl costs the American economy more than $1 trillion a year, according to a new study released by New Climate Economy.

"An awful lot of auto travel and sprawl is the result of market distortions," Todd Litman, the reports author, told The Washington Post. Litman is taking into account several factors, including the home mortgage interest deduction that encourages large, suburban housing, as well as offsetting the true costs of maintaining roads. In a more efficient, realistic market, he says, "consumers would rationally choose to own fewer automobiles, to drive less, to rely more on walking, cycling and public transit, and they’d choose more compact home and work locations simply because that really optimizes everybody’s benefits."

Additionally, the report claims sprawl is bad for residents’ health. Americans who live in sprawled neighborhoods are between two and five times more likely to be killed in car accidents and are twice as likely to be obese.

In contrast, more compact neighborhoods not only offer health benefits, but provide residents with more economic opportunity, the report states. Residents of compact, connected communities save an average of $5,000 on transportation expenses per year, and real estate in these communities tends to retain its value better than homes in sprawled communities due to greater accessibility to services.

However, The Washington Post reports the $1 trillion figure is based on a significant amount of assumptions grounded in what Litman says the opposite of sprawl should look like. The report doesn’t factor in the costs of lower social mobility for children growing up in urban areas, nor does it take into account the higher housing costs of cities or the cost of the public transportation systems that would need to be constructed to support greater urban populations.

But The Washington Post reports Litman’s underlying point is a valid one, and economic modeling is imprecise, especially when it comes to matters such as land use.

Regardless of the tangible number, The Washington Post says the costs of sprawl are massive and often externalized. At a global scale, America is one of the worst offenders when it comes to sprawl. Atlanta, Houston, Portland, Ore., Chicago, San Francisco, Washington D.C. and Los Angeles top the global list of the most sprawled cities – measured in number of residents per hectare.

However, the current trend of urbanization, especially among younger and elderly Americans, is encouraging, according to Litman. “We are now seeing growth in demand by millennials and the elderly for affordable, compact housing in accessible and multimodal neighborhoods,” he said in a statement. “However, current government policies tend to favor larger, less-accessible homes. For example, in most communities there are strict limits on development densities, restrictions on multifamily housing and excessive parking requirements, which drive up housing costs and encourage sprawl. Consumer preferences are changing; government regulations on housing should too.”