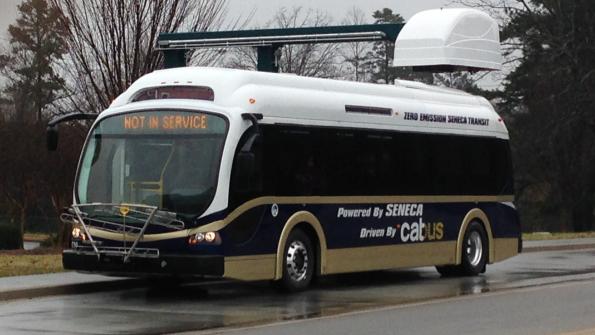 Seneca, S.C., and its transit operating partner, Clemson Area Transit (CATbus) made the decision to switch the entire diesel bus fleet to EV (electric vehicle) buses. Fleet managers weighed all of the options available on the market, including diesel, CNG, hybrid and fuel cell buses, before choosing EV models.

Seneca and CATbus chose Greenville, S.C.-based Proterra to supply the fleet with Proterra zero-emission 100 percent battery-electric buses. The selection was made after a lengthy qualifying process.

“Proterra was able to effectively demonstrate and quantify our potential costs savings and environmental impact through a detailed analytical and metric-driven process,” says Seneca Planning and Development Director Ed Halbig. “However, we also expected the buses to be completely reliable and to perform as well as, if not better, than standard diesel buses.”

After passing stringent field-testing, the CATbus vehicles went into full-time service in September 2014. Performance has met expectations and fleet operating costs have decreased.

“In the time since the buses have gone into service, we have not purchased a single gallon of diesel fuel. Electric CATbus vehicles are getting the diesel equivalent of roughly 18-19 miles per gallon, four times that of a standard bus, saving us thousands of dollars each month,” says CATbus Executive Director Al Babinicz. “Because the EV buses have no exhaust system, no engine and no need for oil changes, we are also seeing significant savings on maintenance, and Proterra provides excellent support for its buses. We couldn’t be happier with our choice.”

Seneca has since purchased two additional buses and has chosen to convert its entire fleet to EV. That decision makes Seneca the first city in the United States with an all-electric bus system.

“Seneca is all-in on EV transit, and we are not looking back,” says Halbig. “While we are proud to be the first city to switch its entire system to EV buses, based on performance and value, we think others will follow suit quickly.”