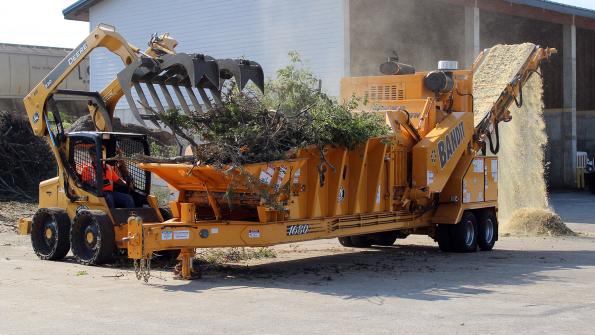 The public works department of Goodlettsville, Tenn., has come up with an efficient solution for disposing of the city’s urban tree and wood waste.

The public works department of Goodlettsville, Tenn., has come up with an efficient solution for disposing of the city’s urban tree and wood waste. The Nashville suburb spans 15.5 square miles and has a population of nearly 17,000, so cleaning waste wood is no small task.

At one time the task took weeks, but, since the city purchased a 350-horsepower Model 1680XP-Series Beast horizontal grinder, built by Bandit Industries, the disposal process now takes one or two days.
Today, the city completes its chipping work with fewer workers and less fuel. Before the new equipment arrived, Goodlettsville was backlogged with chipping and grinding work, so it was slow to respond to complaints about downed trees and limbs.

With the new grinder, Goodlettsville is spending less money on disposing of the end product — sometimes the only expense is transportation costs — and the public is able to get a high-quality mulch that is home-grown and homemade. “Before we got this piece of equipment, if we were backlogged, we would have to call in outside companies to haul the limbs away,” says Public Works Superintendent Amy Murray. “And that would cost thousands of dollars at a time.”

In the past, the city ran a pair of aging hand-fed chippers for weeks at a time. Department management had to pull crews off other projects to operate the old chippers. Today, the Beast runs two days a month, freeing up workers for other projects. Additionally, one person can operate the remote-controlled Beast from the comfort of a loader tractor.

“That efficiency has spilled over and has allowed us to spend time doing more right-of-way maintenance projects, more pothole patching, more drainage work, more sidewalk work. The list goes on,” Murray adds. “We’re able to get to projects in the city a lot faster because of the efficiency we’re seeing.”