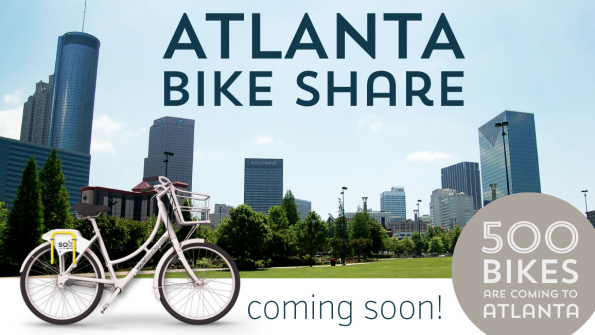 The program will make 500 bikes available to city residents in effort to boost cycle-commuting numbers.

Last week, Atlanta mayor Kasim Reed signed a contract to initiate a bicycle-sharing program in the city. The 500-cycle fleet is expected to hit the streets later this spring.

In a prepared statement on the new program, the mayor said it will be a crucial component in realizing his goal to double the amount of bike-to-work commuters in the city, from 1.1 percent to 2.2 percent, by 2016.

“Over the past three years we have achieved several major milestones for citizens to enjoy bicycle riding along city streets, paths and trails,” Mayor Reed said at the signing.  “With the signing of the contract today, we’re able to accomplish another major step forward to become a top U.S. city for bicycling.”

Users will be able to rent bicycles online, via mobile app or using a digital interface on the bike itself, according to the Atlanta Business Chronicle. “Our bike share program will be a convenient transportation option that will connect with other modes of transportation," said Terri Lee, Atlanta’s Deputy Commissioner at the Department of Planning and Community Development.

Atlanta’s program will use the latest “Smart Bike” system, using a fleet of cycles equipped with integrated GPS-enabled locking mechanisms so riders can return a bike to a hub location or any public bike rack, according to city materials.

The city has contracted with CycleHop, which operates the bike share programs for Phoenix; Orlando, Fla.; Santa Monica, Calif.; and Tampa, Fla., to manage its operations. CycleHop’s partner, Social Bicycles and local firms Center Forward and Iconologic will also be involved with the program.

The bike share will use private-public partnership model, and will depend on corporate sponsorship, The Atlanta Journal Constitution reports. Business and property owners will be encouraged to participate and support the program through sponsorship, adopt-a-station programs and purchasing memberships.

"Over the next few months we will be working with our partners to identify potential bike rental station locations in the city's core," said Office of Planning Director Charletta Wilson Jacks in a statement issued to the media. "Our bike share program is yet another transportation option we can offer to residents and visitors who wish to get around the city with more safe, affordable and convenient options."