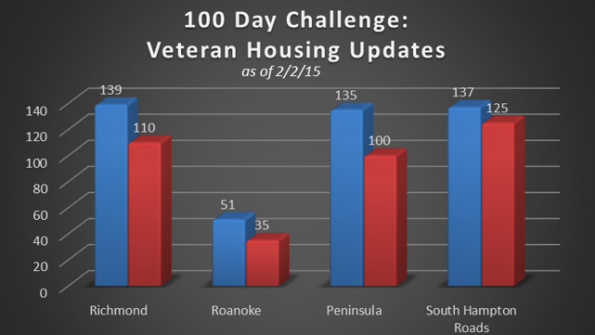 Virginia on track to end homelessness among veterans

Last week Virginia Governor Terry McAuliffe announced that 462 homeless veterans have been housed or are in the process of receiving housing thanks to the state’s 100 Day Challenge program. The state has reduced veteran homelessness by 75 percent since September – the fastest drop ever made by any state.

“Virginia is closer to meeting our goal today more than ever before,” McAuliffe said in his statement. “We now need to continue to remember that the needs of veterans experiencing homelessness are urgent, but if we keep up the momentum, we can ensure that veteran homelessness is prevented whenever possible or becomes and remains a rare, brief and nonrecurring experience.”

Claudia Gooch, who works with the Planning Council of Norfolk, Va., says collaboration in her state between nonprofit organizations, the Department of Veterans Affairs and public housing authorities as well as state and local governments have helped make headway. “We’ve had a lot of resources during this challenge, so we’ve been able to get a lot of people housed,” she told local TV station Channel 3 News.

The 100 Day Challenge started with a two-day event in September where community partners from Richmond, Roanoke, Hampton Roads and the Peninsula area created a system of coordination in the regions to house veterans faster, according to program materials. The four teams worked to eliminate the duplication of processes and ensure an efficient and effective distribution of resources to Virginia’s veterans. The program was sponsored through the Virginia Coalition to End Homelessness, private donations and community partners.

The four teams all:

However, teamwork alone didn’t accomplish the feat. It took meticulous planning and the use of already-proven strategies to house Virginia’s homeless vets. Cities Speak reports data-driven analysis of the problem was key to its solution.

The 2014 point-in-time count found there were 620 homeless veterans across the state. The four teams were organized to house at least 370 of these veterans during the 100 Day Challenge. This goal was determined by using data from the community’s Homeless Management Information Service, VA data and the knowledge of outreach workers and case managers, Cities Speak reports.

Virginia’s success was also informed by cities that have vetted methods of reducing homeless populations, according to Cities Speak. Phoenix, Salt Lake City, New Orleans, Houston and others involved with the Department of Veterans Affair’s 25 Cities Initiative, a nation-wide effort to end veteran homelessness in communities with the highest concentrations, have helped develop concrete assessment and prioritization processes to help place the most vulnerable veterans into housing swiftly and efficiently.

In each of these communities, and in Virginia as well, a “housing first” approach was taken, Cities Speak reports. An understanding that the best way to solve homelessness is by placing individuals in housing first and then providing them with the help they need to get a job, get over addiction or treat medical issues as needed to keep them off the streets.