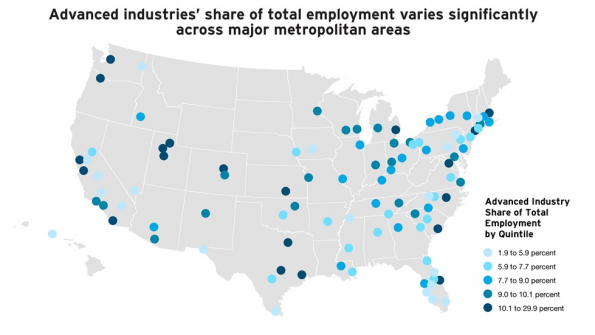 Advanced industries, such as engineering, manufacturing and research and development are driving economic growth in the U.S. But where are the cities where these industries thrive?

Years of recession left the U.S. economy in a state of stagnation, but several cities are emerging as economic powerhouses – particularly for their high concentration of “advanced industry” jobs.

Characterized by involvement with technology research and development as well as STEM (science, technology, engineering and math) workers, the advanced industry sector is made up of approximately 50 different industries ranging from manufacturing to aerospace and engineering to software design, according to a new report from the Brookings Institute.

The advanced industry is an important economic anchor for the U.S. economy, and has led much of the post-recession employment recovery. Although it is small in size, the sector is economically critical. About 9 percent of the U.S. workforce holds advanced industry positions, yet this small sector makes up about $27 trillion in value added annually, or 17 percent of the U.S. gross domestic product, the institute reports.

But these jobs are not equally distributed across the country. Certain metro areas have higher concentrations of advanced industry roles than others. CNN Money reports that some of these cities aren’t surprising. Number one, San Jose, Calif., is located in the heart of Silicon Valley and has nearly twice the advanced industry jobs as number two Seattle.

Others are not so intuitive – number three, Wichita Kansas, is an example. CNN Money reports that while the Midwestern city isn’t usually thought of as a tech hub, it is home to major manufacturing facilities for the makers of small aircraft.  The top 10 tech-centric cities, according to Brookings are:

Many of these cities have positions available in multiple advanced industries. Detroit, for example, is home to automotive manufacturers as well as advanced battery and software companies.