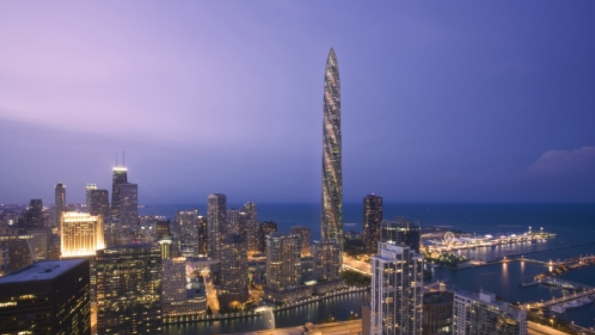 Outside the box answers for a failed construction project

With the Chicago Spire project dead in the water, local architects are coming up with unique alternate projects for the site.

What was supposed to be the second-tallest building in the world is instead a giant hole in Chicago. Now, architects are offering up unique solutions on what to do on the site of the failed project.

Conceived about a decade ago, the plan to build the massive, 2,000-foot tall tower ground to a halt during the recession according to Chicago Business. In November, the project was officially declared dead when developer Garrett Kelleher handed over the property to his biggest creditor after failing to make a required payment in late October.

The property is now held by Related Midwest LLC, which is committed to putting something on the site, not simply leaving it as is: a 76-foot deep foundation hole. “We are pleased to have resolution on 400 N. Lake Shore Drive, the site of the former Chicago Spire project,” Midwest President Curt Bailey said in a statement at the time. “We recognize the importance of this site to the city of Chicago and look forward to creating an architecturally significant and thoughtful development befitting this premier location.”

But the future of the hole is uncertain, and no one is sure what the company means by “an architecturally significant and thoughtful development.” So Chicago Magazine challenged five local architecture firms to put on paper what they would do with the site.   Responses ranged from the utilitarian, to the aesthetic to the unique.

SPACE Architects + Planners would see the site converted into an underground amphitheater. "By building the venue into the foundation hole, you’re emphasizing a phone-in-the-ground effect of having to put your ear up to it to get the full sound,” Jean Dufresne, one of the lead designers told Chicago Magazine.

Peter Schaudt, of design firm Hoeer Schaudt, envisions a green space built to act as a haven to Chicago’s 5 million migratory birds. He would like to see the site filled with native plants and feature a 10-story spiraling trellis for birds to nest and perch. “It’s an oasis in the middle of the city,” Schaudt, told the magazine, “not only for people but for birds.”

Michael Day, of VOA, pictures a space filled with modern, sustainable housing, not reaching heights of more than a few stories. “Rather than build another skyscraper, we’ve chosen to celebrate the vacuum,” he told Chicago Magazine.

Devon Patterson, of Solomon Cordwell Buenz, had the opposite idea. He envisions a 1,280-foot high rise, but to have it stand out in the crowded skyline, included elevated gardens where residents can grow fresh fruits and vegetables.

Martin Felsen and Sarah Dunn, from Urban Lab, who would see the area turned into a two-acre swimming pool. While the idea might be a relief in the Chicago summers, it’s not likely the direction the Related Midwest will take. “Our pitch didn’t go far with the developer,” Felsen told Chicago Magazine.

And perhaps the most “outside the box” solution, offered by Clare Lyster and Alejandro Saaverdas, of CLUAA, would be to transform the site into a giant municipal hot tub, with the water heated by the radiant energy from a subterranean data center.