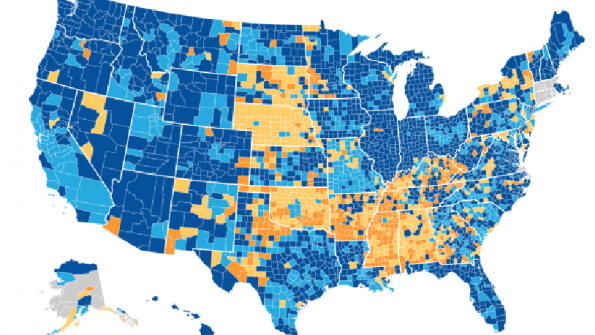 A new report from the National Association of Counties found that effects of the recovery have not been felt equally.

The National Association of Counties (NACo) recently released an exhaustive study of the economic performance of the nation’s 3,069 counties, measuring four key performance indicators – economic output, employment, unemployment and home prices. The group found that although 2014 was a year of significant economic growth, recovery at the county level seems to be sluggish and uneven.

Yet, NACo found that overall, job growth has been improving, with 63 percent of counties seeing faster job growth in 2014 as compared to 2013. Western county economies have seen the most improvement, and the trend was most pronounced in medium-sized economies – those with populations between 50,000 and 500,000. Economic output expanded in more than half of county economies in 2014, although this growth was at a slower rate than in previous years.

According to the study, only 65 counties have fully recovered to pre-recession levels in all four indicators measured. These counties were mostly small, with populations of less than 50,000 and most were located in areas with booming energy and agriculture sectors.

However, this does not indicate a weak recovery. NACo found that 72 percent of counties recovered in at least one category, and for the first time one of the 124 large counties (population over 500,000) has recovered to pre-recession levels in all four categories. In 2014 Kent County, Mich., fully recovered.

For more information on the recovery at the county level, read a summery of the report’s key findings here. And to track your county’s progress, check out the interactive map.