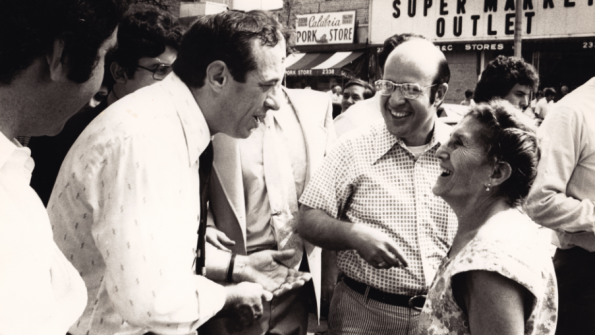 When examining the multi-cultural melting pot that is America, two contrasting images emerge. The first image is the pervasive notion of a very welcoming America: “Give me your tired, your poor, your huddled masses yearning to breathe free”. The second image is the reality of a society that is often intolerant of different cultures and ethnicities. "The Italian Americans" examines this dichotomy.

Documentary filmmaker John Maggio highlights the struggles of Italian immigrants in his new PBS series The Italian Americans. The two-part, 4-hour series, which will air at 9 p.m. on Feb. 17 and 24, is narrated by Academy-Award nominated actor Stanley Tucci and features interviews from government leaders including U.S. Representative Nancy Pelosi and Supreme Court Associate Justice Antonin Scalia as well as footage of New York Governor Mario Cuomo.

Managing Editor Erin Greer spoke with Maggio to get insight on the project.

GREER: What was your vision for this piece? What inspired it?
MAGGIO: I really wanted to tell an honest history of the Italian American experience and to break down all of the stereotypes. I feel that so much of our history has been cloaked in myth and tainted by mafia and criminal associations from movies and television but also by a kind of sticky sweet nostalgia that is often all that is passed down by our families. I realized one day that I knew very little about my own family's immigration story. Basic facts were missing, so I was in many ways searching for my own narrative. That's really what inspired me to dig more deeply.

GREER: Why is it important that this story be told? Why now?
MAGGIO: I think understanding the history of the Italian American experience is vital. The issues raised during the great wave of Italian immigration at the dawn of the 20th century mirror the debate surrounding our current immigration crisis. Italians then were known as "birds of passage" because they made multiple trips back and forth between Italy and America. They wanted to make money in America and send it home. But eventually they decided to stay, and they were not always welcome. Italian Americans, like the Irish before them, were at the bottom of the social ladder for a long time and barely considered white. At Ellis Island, southern Italians would list their race as "south Italian." So as we confront the issue of how to treat new waves of immigrants today, we can't forget that struggle or that most of our families were all strangers to this country at some point.

The turning point for acceptance and assimilation of Italian Americans was World War II. As Justice Scalia points out in the documentary, "Two of my mother's brothers, Vincent and Anthony, fought in Europe. I don't think they regarded themselves as Italians anymore. They regarded themselves as Italian Americans. If there was going to be a war between Italy and the United States, [there was] no doubt what side they'd be on."

The series also highlights second-generation Italian American Cuomo, who was elected governor of New York in 1982. In 1984, he gave the keynote address at the Democratic National Convention in which he recounted, "I learned about our kind of democracy from my father…a man who came here, uneducated, alone, unable to speak the language who taught me all I needed to know about faith and hard work by the simple eloquence of his example."

The story of his hard-working immigrant father represented the American dream and inspired Italian Americans such as future U.S. Representative Pelosi who said of the speech, "It was compassionate. It was pragmatic. It took pride in his Italian American heritage."

Two years later, Scalia was appointed to the Supreme Court as an associate justice. "When my confirmation was final, I got cartloads of mail from Italian Americans just expressing their pride in my appointment…I think for Italian Americans, given what they most abhor, which is their identification with crime and the mafia…it meant an awful lot to them."

The next year, Pelosi was elected to Congress, where she would make history as the first female and first Italian American Speaker of the House.

For more from Scalia, Pelosi and Cuomo, watch Maggio's The Italian Americans on PBS on Feb. 17 and 24 at 9 p.m.