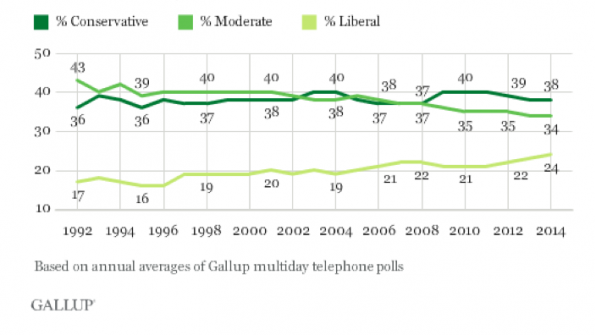 For the third straight year, the number of Americans identifying themselves as politically liberal has grown.

The number of Americans considering themselves to be liberal has grown for the third straight year in 2014, making the right/left gap the smallest it’s been since Gallup first began this study in 1992.

Over time, Gallup found, the growth of both the liberal and conservative populations has come at the cost of the moderates – a group that has been steadily shrinking through the years.

Another study shows that many Americans are pulling away from the both parties, choosing instead to identify as Independents. In the study, Gallup found 26 percent of the population identifies as Republican, 30 percent as Democrat, and 43 percent identify as politically independent – an all time high since the study began in 1988.

The takeaway, according to Gallup, is that over the past two decades, Americans' ideological leanings, or at least their willingness to associate with certain ideologies, has changed.

“But to a large extent, these changes reflect opposing ideological shifts within the parties, not national trends,” according to Gallup. “That helps explain how there could be a record proportion of liberals at a time when Democratic identification was at a long-term low.”