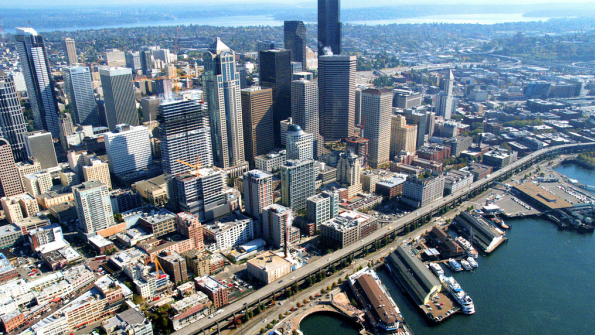 The two-mile tunnel under downtown Seattle, once expected to be open last month, may not be ready until the summer of 2017.

Seattle’s most ambitious infrastructure project to date has been further delayed, according to Chris Dixon, a top executive at Seattle Tunnel Partners, the contractors chosen to head up the project to construct a two-mile long tunnel under downtown.

Begun last year, the project was plagued from the start when “Bertha,” a 326-foot long, 2,000-ton tunnel boring machine, became stuck deep below the city’s waterfront, according to The Washington Post.

About 1,000 feet into its 9,200 foot route, the machine overheated and stalled when grit penetrated the seals around its main bearing, according to The Seattle Times. Engineers are now working to dig down to the machine and extract it for repairs.

As of last Monday, crews had excavated 90 feet of the 120-foot access vault, The Seattle Times reports. Once Bertha is reached, a large crane will be used to hoist the front end of the machine so its cutter head, bearings and other parts can be brought to the surface for repairs.

Once expected to be complete and ope for operation last month, it is now estimated the tunnel wont be open to traffic until August 2017, according to The Seattle Times. But even that estimate might be ambitious.

“The uncertainty is how long [repairs are] going to take, because we’re really attempting to do something here that hasn’t been done before,” Dixon said in a news conference last week.

But delays have critics of the project concerned. With costs increasing, some city council members fear Seattle will be stuck with the bill. The state legislature authorized $2.8 billion for the project, according to The Washington Post, and City Councilman Michael O’Brien, who opposed the tunnel from the beginning, says about 70 percent of those funds have already been spent.

“I think we’re at a point today looking forward where people need to be asking, 'Okay, we’ve sunk a lot of money into this. If we get to a point where the contractor isn’t willing to sink any more money in, where do we go from there?',” O’Brien told The Washington Post. “I hear a lot of frustration from folks that they’re not seeing elected officials step up and own up.”

But officials insist they will finish what they started.  “The state fully intends to stay the course and complete this job,” Matt Preedy, the state’s deputy Highway 99 administrator, told The Seattle Times.